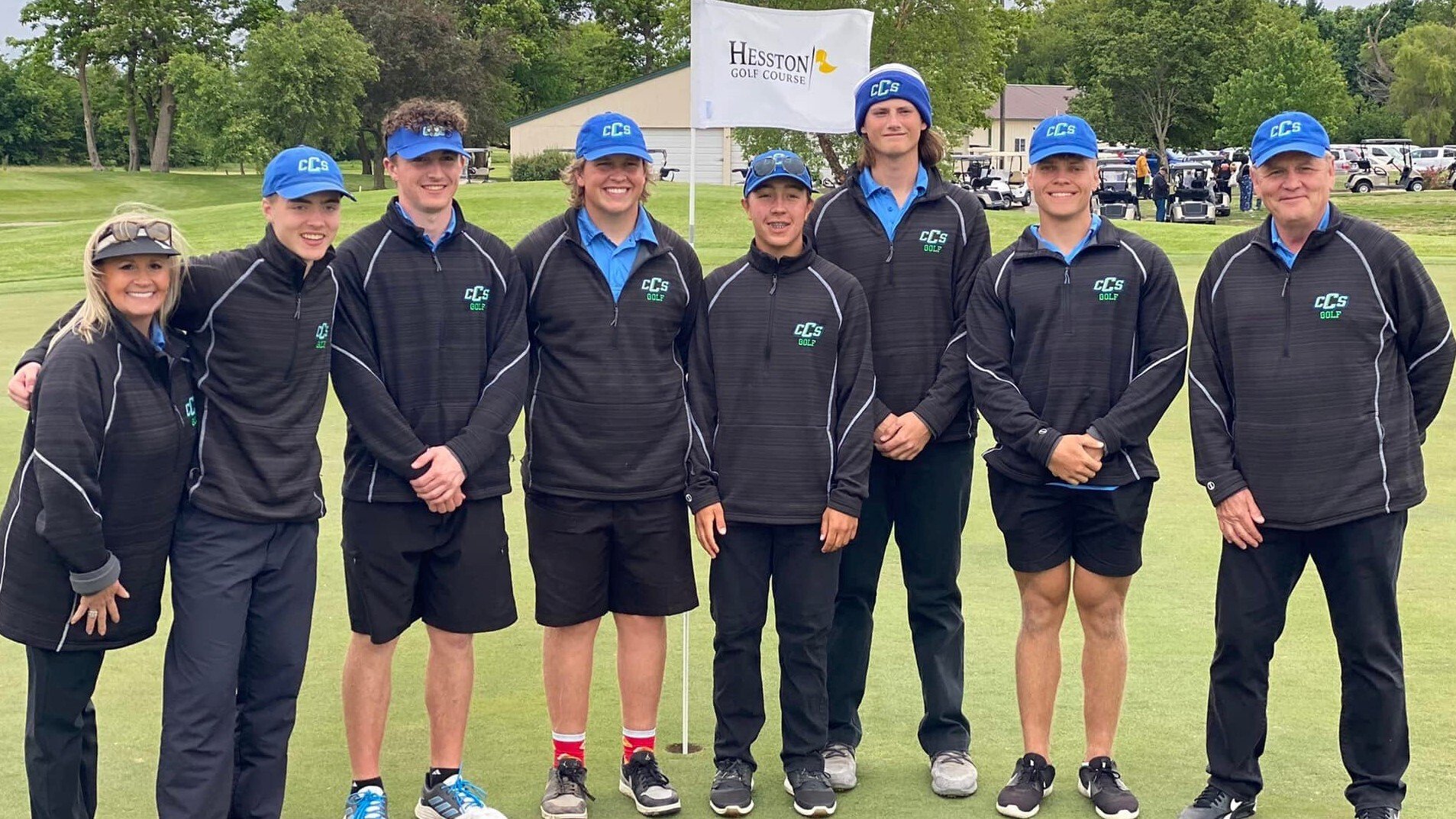 HESSTON
– Ryland Kooiman’s golf ball was perilously close to the water’s edge Monday afternoon near the end of the first round of the Class 1A state tournament at Hesston Municipal Golf Course.


Kooiman, a Hutchinson Central Christian freshman, dodged trouble on the par-5 18
hole when his third shot settled near a pond right of the green. With a large crowd gathered to watch Kooiman and the rest of the final group complete their rounds, he faced a difficult pitch shot over a greenside bunker to a tight pin.

Kooiman took a healthy divot as he lofted the ball over the sand and on to the putting surface, where it rolled 10 feet past the hole. He then knocked in the par putt for a 5-over-par 76 that staked him to a one-shot lead in the individual medalist battle.

“That was a pro golf shot,” Central Christian coach Michelle Capps said. “It’s just not what a high school freshman does. He was so calm and cool just like everything else he does.”
Those turned out to be Kooiman’s final shots of the tournament, as the steady rain that peppered central Kansas on Monday night and early Tuesday forced the cancellation of the final round. Kooiman won the 1A individual title, and Central Christian claimed its first boys team title in any sport with a five-shot victory over Centralia.

Kooiman and fellow freshman Nathan Reed, who shot a season-best 85, led the Cougars to a four-man score of 355. Junior Drew Yoder’s 95 and senior David Weis’ 99 helped Central Christian cap the season with victories in all but one of its nine tournaments.

“Last year, we got rained out on the second day and it was just over,” said Capps, whose team finished sixth at the 2021 1A tournament in Emporia. “We knew for the last three days there was a chance this could happen again. (Assistant) Bob (Capps) and I told them, ‘This could be our last day. We don’t know but let’s play like it is. Enjoy that walk down the 18
hole and take it all in.’ And they just played their hearts out.”
Central Christian posted the lowest score of 1A’s four regional champions last week with a 357 at Halstead’s Wedgewood Golf Course. With the others – Rawlins County, Centralia and Montezuma-South Gray – all within 10 shots, Capps expected a close battle over the two days.

Instead, the second-year head coach and her team packed all the anxiety into one day.

“Our first couple practices, I told them we’re going to be in the top three of 1A this year,” Capps said. “But I really thought we’d be top two and as the season went along, I thought we could do it. (Monday) was a little dicey though because we had some not-so-great scores on a few holes, but they all came through.”
Centralia, led by sophomore Paxton Bowers’ 85 and junior Drew Gibbs’ 86, finished second after taking fourth in 1A a year ago. Rawlins County, which was led by senior Isaac Domsch’s 84, shot 364 to finish third for the second straight year.

Individually, Kooiman’s 76 put him ahead of four sophomores who rounded out the top five. Solomon’s Spencer Coup finished second with a 77, Mitchell Lehman of Ingalls was third with a 78, Goessel’s Noah Schrag carded an 80 and South Gray’s Jaxon Koehn finished with an 81.

Reed, whose first high school season included five rounds in the 80s, was part of a four-way tie for eighth with his 85.

“Nathan had his best round of the season,” Capps said. “The upperclassmen all knew where we were standing at the end of the day, and knew what that meant if we were rained out. They gave a big thank you to Ry and Nate for how they played. It was really cool.”
According to KSHSAA’s championship history records, Central Christian’s state titles include a 1A-Division II volleyball championship in 2010 and Scholar’s Bowl titles in the same class in 2011 and 2013. Former boys cross country standout Collin Oswalt won 1A championships in 2018 and as a senior in 2020.

With her entire state team – which included senior Carson Hamby and junior Gage Regehr – in tow for the 35-minute ride home from Hesston on Tuesday, the Cougars reminisced about their season and arrived at the school to a heroes’ welcome of 40-50 supporters.

“It was surreal,” Capps said. “The boys just couldn’t believe all those people were there for them in the pouring rain. We went inside the commons area and took pictures and each one of the boys gave a little speech. It was all very heartfelt.”