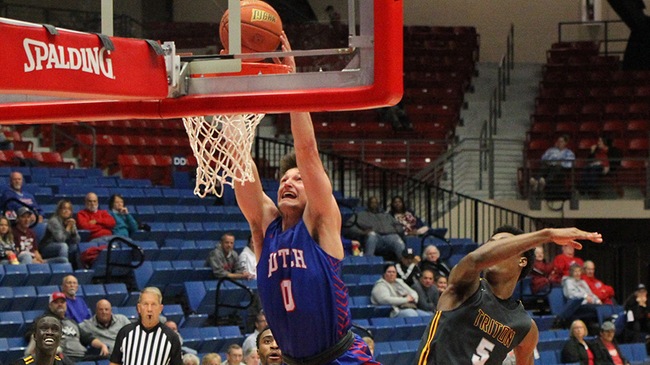 Kernan Bundy hammers home a dunk in the No. 13 Blue Dragons' 113-105 win over No. 7 Triton on Friday night at the Sports Arena. (Billy Watson/Blue Dragon Sports Information)

HUTCHINSON, Kan. – Redshirt freshman Aaron Franklin tallied a career-high point total for the second-straight game and helped the No. 13 Hutchinson Community College Men’s Basketball team to a huge victory over the No. 7 team in the NJCAA on Friday.

Franklin scored 20 or his career-high 34 points in the second half to lead the Blue Dragons to a thrilling 113-105 victory over the Triton College Trojans on Day 1 of the BSN Sports Tipoff Classic at the Sports Arena.

The Blue Dragons built a game-high 20-point lead after a Jayden Garrison layup with 59 seconds left in the first half. Triton scored the final five points of the half to cut the Dragon lead to 58-43. The Trojans extended that run to start the second half and pulled with 58-49 with 18:30 to play in the game.

The Tritons cut the Dragon lead to as few as five points five different times in the second half, the final time when Keyondre Young nailed a 3-pointer with 3:06 left to give the Dragons a 103-98 lead.

Franklin then slammed the Door on Triton with back-to-back baskets to push the Dragon lead back to 107-98 with 2:14 to play.

Franklin established a new career high with 28 points against Fort Scott on Tuesday. The Blue Dragon redshirt freshman roared past that mark going shooting 16 of 23 overall, going 2 of 6 from the 3-point line. Franklin also had a career-high eight rebounds

Franklin is the first Blue Dragon since Jacquez Yow to break the 30-point mark since last season.

Aaron Potter went 4 of 7 from 3-point range and finished with 15 points.

T.J. Beil had 29 points to lead Triton. Brandon Mantu and Young had 22 points each.