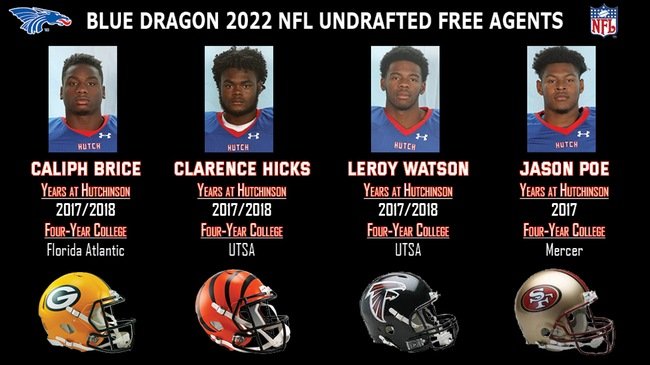 
HUTCHINSON –
After the completion of the 2022 NFL Draft on Saturday, four former Hutchinson Community College football players were selected by NFL teams as undrafted free agents.

Since 1967, 39 Blue Dragon players have either been drafted or selected as an undrafted free agent.


CALIPH BRICE
– Green Bay Packers
Brice was a two-year starting linebacker for the Blue Dragons in 2017 and 2018.

He was a second-team all-Jayhawk Conference selected in 2018. Playing in 12 games, Brice had 71 tackles, including 1.5 quarterback sacks. He also had two blocked kicks on special teams. Brice played in 11 games in 2017 and recorded 51 total tackles with 1.5 quarterback sacks, an interception and fumble recovery.

Watson is the fourth Blue Dragon to sign or be drafted by the Falcons … Mack Herron (sixth round 1970), De’Vondre
Campbell (fourth round 2014) and Tyler Williams (UDFA 2017). Watson will also be joining former Blue Dragon Cordarrelle Patterson, who signed with the Falcons before the 2021 season.


CLARENCE HICKS
– Cincinnati Bengals
A defensive tackle who played for the Blue Dragons in 2017 and 2018. Playing sparingly in 2017, Hicks started in 11 games in 2018. He earned second-team all-Jayhawk Conference honors in 2018. He registered 42 total tackles, including 14 quarterback sacks and 23 tackles for loss. He had 42 total tackles in his Blue Dragon career, which included two forced fumbles and two passes broken up.

This past season at UTSA, Hicks was a first-team All-Conference USA honoree and was named the league’s Defensive Player of the Week twice in 2021 as an outside linebacker. Over his three seasons at UTSA, Hicks had 108 total tackles with 31 tackles for loss and 12.5 quarterback sacks. Hicks also had seven passes broken up, two interceptions and three forced fumbles.


JASON POE
– San Francisco 49ers
While with the Blue Dragons in 2017, Poe was a running back. He played in four games and rushed for 18 yards.

Originally after playing at Hutchinson, Poe transferred to Lenoir Rhyne College before winding up at Mercer University. At Lenoir Rhyne, he was a two-time all-South Atlantic Conference player and an NCAA Division II All-American as an offensive lineman in 2019.

Finishing his collegiate career at Mercer, Poe played in all nine games in 2021. He is the first Mercer player to either be drafted or selected as an undrafted free agent in that program’s history.