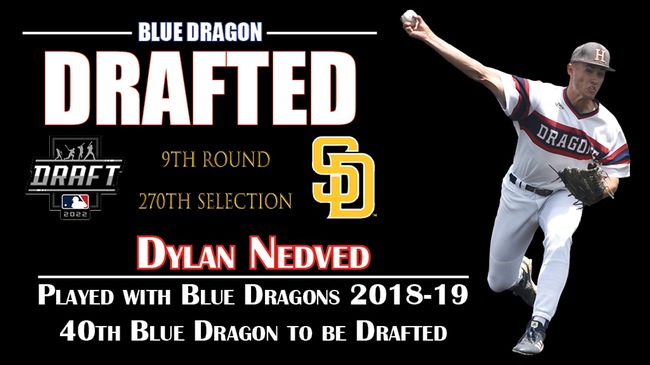 Nedved was drafted in the ninth round with the 270th overall selection as a pitcher by the San Diego Padres on Day 2 of the three-day draft.

Nedved played at Hutchinson in 2018 and 2019, coming to the Blue Dragons from Shawnee Mission Northwest High School in Shawnee, Kansas. After graduating from Hutchinson in 2019, he played three seasons at the University of Iowa, completing his eligibility in 2022.

The former Blue Dragon is the eighth Hutchinson player selected in the Top 10 rounds in program history, the first since Nolan Hoffman was taken in the fifth round in 2018. Nedved is the eighth Blue Dragon mentored by head coach Ryan Schmidt to be drafted.

With the Blue Dragons, Nedved was a two-way player as an infielder and pitcher.

As a Blue Dragon, Nedved hit .343 with 15 home runs and 21 RBIs. He was a two-time All-KJCCC player and was selected as an all-Region VI player in 2019. The Blue Dragons won 83 games in Nedved’s two seasons, including one Jayhawk West title and a third-place and runner-up Region VI finish.

As a pitcher, Nedved appeared 33 times with 15 total starts. The right-handed pitcher compiled a 10-3 career record with five saves and a 3.92 earned-run average. In 96 1-3 innings pitched, Nedved tallied 116 strikeouts. In the final week of the 2019 regular season, Nedved was named the NJCAA National Pitcher of the Week,