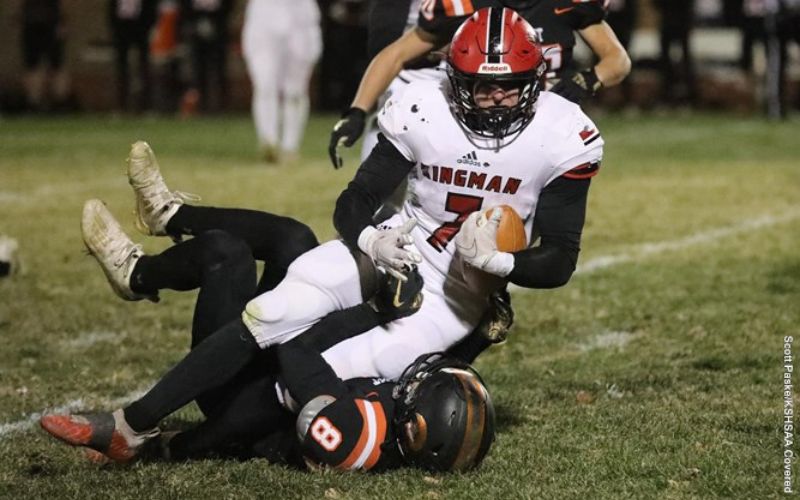 Kingman's Jake Fischer and the Eagles are in the Class 2A semifinals for the second straight season.

HUTCHINSON, Kan. – It will be a busy Saturday next week for Ad Astra Radio. With area football teams winning five substate games on Friday, there will be plenty of action to listen to as you shop on Small Business Saturday.

Andale will be going for its fourth straight Class 3A championship at Gowans Stadium in Hutchinson; Kingman will play in its first state championship game in 50 years when they play in the Class 2A game in Salina; Inman is back at the Class 1A championship game in Hays after falling last season; Little River is in its third straight Eight-man Division 1 title game; and Cunningham is seeking to become the first official Six-man state champion in Kansas history.

Kingman’s defense is one of the state’s best

While Kingman entered Friday’s game with the state’s best scoring defense among all the semifinalists in all classes, this was a unique challenge. Southeast of Saline came as close as anyone to beating Andale in the last four years last season, when the Trojans lost in the 3A semifinals 37-16, a game that was closer than the score indicated.

This season Southeast of Saline had amassed some 5,000 yards of offense and scored at least 38 points in every game. Friday, Kingman clamped down on the talented Trojans and the dynamic duo of quarterback Luke Gebhardt and wide receiver Jake Gebhardt, Until a late clutch 97-yard touchdown drive that sent the game to overtime, the Trojans mustered just six points in regulation and struggled to move the ball.

In the second overtime, a botched snap put Southeast of Saline 16 yards from the end zone of third down. The Kingman defense turned into a pack of Rottweilers after discovering a package of raw meat. The Trojans didn’t have a chance on those final two plays.

Kingman’s offense deserves respect and praise, but the defense is just as talented.

There is no stopping Andale right now

Here’s all you need to know about Andale. The Indians beat Clay Center 36-0 in Friday’s 3A semifinals, and one of your first thoughts is, “Wow … close game for Andale.”

Yes, that’s tongue in cheek, but the fact is Andale has been pulverizing teams with regularity that it does seem a little surprising when the margin isn’t by 42 points or Andale doesn’t score at least 45 points.

Andale is peaking right now. Frightening notion, but in the Indians’ last four games, three of which featured good offensive teams in Pratt, Rock Creek and Clay Center, they have outscored their opponents 192-6. I just don’t know if this team is beatable in 3A right now.

Holton will give it a whirl next week in Hutchinson. Coached by Brooks Barta, the son of Smith Center coaching legend Roger Barta, Holton has won 11 in a row and has a great program. The Wildcats have beaten Topeka Hayden twice and 2A semifinalist Sabetha. They’re tested.

Once again, you might find yourself thinking, “This is a team that can hang with Andale.” But it also seems like we say that several times throughout the season.

Is there a less appreciated Kansas football powerhouse than Little River? Odd to say, as Little River is making its third straight appearance in a state championship game.

Now, Little River is back. Little River overcame a tough 30-point loss to start the season to Canton-Galva by mercy-ruling all but one opponent since then, including a sensational Burlingame team in Friday’s semifinals 48-0.

When Inman was squashed 35-14 by Conway Springs earlier this season, it opened some eyebrows. Inman, a 1A finalist last season, was cruising along before Conway Springs paid a visit and won comfortably.

Injuries have decimated Inman these last two seasons, but now, the Teutons are getting healthy. Quarterback/Defensive back Tanner Heckel has recovered from an early injury and was brilliant Friday as Inman avenged that loss to Conway Springs with a 23-6 win.

Inman, like Kingman, will go for its first football title Saturday in Hays against St. Marys, about a billion times healthier than it was last season in its title loss to Olpe.

Six-man football will only grow in Kansas. This year is the first officially-sanctioned KSHSAA six-man playoff, and the first champion will be crowned Saturday in Dodge City.

Cunningham, which for several years didn’t have high school football as it co-opped with a couple schools, has been perhaps the school everyone should point to when it comes to trying six-man football. Four years ago, Cunningham’s only win was by forfeit. This year, Cunningham has hurt opponents. Only a season-opening 38-30 win over Ashland was close.

If Cunningham is going to lift the trophy, the Wildcats will have to beat Ashland again. Cunningham was runner-up in the unofficial six-man playoff last year, while Ashland finished third.