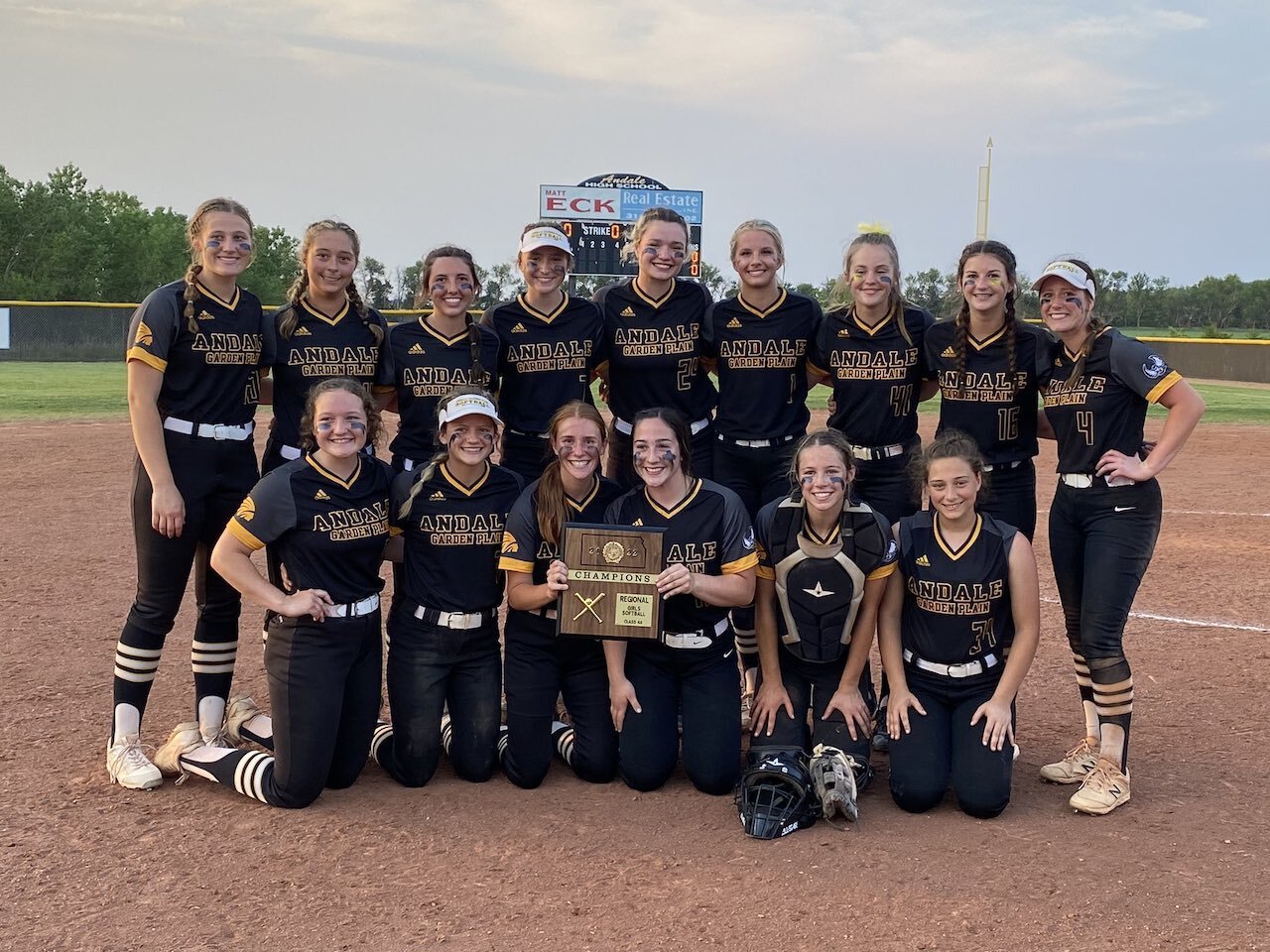 Andale/Garden Plain Softball celebrates after defeating Winfield in the 4A Regional Championship Game, 10-0, on May 17, 2022. (Picture Credit: Andale High School)
By Brad Hallier
HUTCHINSON –
From Fort Scott to Great Bend, and many cities in between, the best high school softball and baseball teams in Kansas will gather Thursday and Friday to decide state championships in five classifications.

The Ad Astra Radio listenership area will be represented, but the number of area teams at state seems to be a little smaller than usual. Nevertheless, here are some storylines to watch for at this week’s state softball and baseball tournaments.

This year, the Indians are again back to the Class 4A state tournament, played at Bill Burke Park in Salina. Andale/Garden Plain is the No. 4 seed at 20-2 and has the look of a team that could be lifting another trophy on Friday afternoon.

But boy, oh boy, is the Indians’ road filled with some fellow giants. The proverbial elephant in the room will oppose Andale/Garden Plain in the 7 p.m. first-round game – No. 5 Bishop Miege (17-3). Even if Andale/Garden Plain wins there, reigning state champion and top-seed Wamego (21-1) could be waiting in Friday’s 11 a.m. semifinals.

Kingman/Norwich also has a rugged pa
Speaking of tough first-round matchups, in Class 3A, Kingman/Norwich softball has a doozy. The Eagles are seeded No. 4 at 21-2, but drew No. 5 Frontenac (20-3), which comes from a powerful softball area.
Frontenac won the 2019 3A title, and last season, fell in the first round 7-6 to Silver Lake, the eventual state runner-up.

Class 3A is often loaded with great teams that played tough schedules, and this year appears to be no different.

Probably few, if any.

Halstead entered regionals at its homefield with little fanfare. The Dragons were 12-8 and drew 2021 state qualifier Hesston in the first round, which was a tight, tense game that Halstead won 4-3.

Then, Halstead had to play hard-hitting and second-seed Haven, which was in the midst of its best season ever. Again, it wasn’t close. Halstead 11, Haven 2.

At 15-8, Haven’s state seed isn’t great at No. 7. The opposition is tough, too, with Kansas City power Bishop Ward awaiting in the 3:30 p.m. game Thursday at Kansas State. But after what Halstead did last week, is anyone in a position to doubt the Dragons?
Little River continues a great run of boys sports
It’s almost weird that Little River didn’t make the Class 2-1A state baseball last year, after winning a football state title and reaching the semifinals in basketball. But as is usually the case in 3A and 2-1A baseball, geography can hurt you, as Little River was shipped to a regional that included Ellis, which finished in third place.

A wide-open Class 4A baseball tournament awaits
Home-field advantage didn’t mean too much in Class 4A. Only half the regional champions were the tournament hosts. Four regional hosts were ousted in their first game, which speaks to the depth in 4A baseball.
Another testament to how deep 4A baseball is, is the fact there are no private schools playing at the state tournament. Should make for a fun week in Salina.