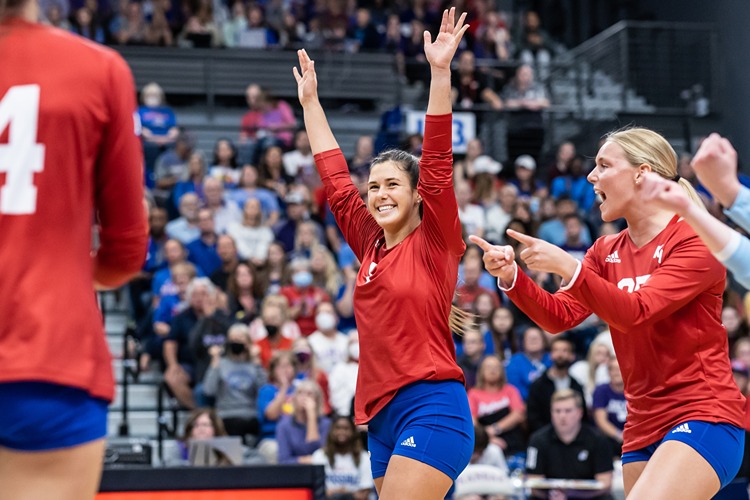 The win was Coach Ray Bechard’s 207th career Big 12 Conference victory, tying him for second all-time in league history. He is tied with Nebraska’s John Cook and trails only Jerritt Elliott from Texas, who has 331 career Big 12 wins.

“Offensively, we were really good,” stated head coach Ray Bechard. “We took a little break at the end of the first set and had a big kill by Rachel Langs to end that set. After that, it gave us a newfound competitive confidence and we took off from there. We played with poise and with confidence, as well as purpose. All of those came together for us.”

The Jayhawks started the first set with a 3-0 run, which included an ace by sophomore Molly Schutlz and a kill by super-senior Rachel Langs. The Wildcats collected their first kill shortly after, however, Kansas responded with another 3-0 run off of three kills by super-senior Anezka Szabo, redshirt freshman Ayah Elnady, and Langs, which resulted in a Kansas State timeout.

A surprise kill by sophomore Camryn Turner put the Jayhawks ahead by six, 16-10. The Wildcats closed the gap, but the Jayhawks remained in the lead, 20-15. Szabo tallied two more kills to make it 23-22, and Langs collected her fourth kill of the set to shut down set one, 25-23.

The Wildcats collected their first point of the set off a kill, however, sophomore Caroline Bien and Dooley each responded with a kill of their own to go up 4-1. The Jayhawks then went on a 7-0 run, which included back-to-back kills by Elnady, back-to-back kills by Szabo and a kill by Langs, along with Wildcat errors, making the score 9-3.

The 7-0 run forced two K-State timeouts. Elnady tallied two more kills to advance the Jayhawks to a 14-4 lead. The Wildcats were able to get a few points of their own, but a kill by Langs and K-State errors kept Kansas ahead, 19-8.

Freshman Rhian Swanson subbed in and collected the sixth kill of her career for Kansas, making it 21-12. Kansas State was able to get the ball back, but a kill by Langs and two kills by Bien took the Jayhawks to set point, 24-16. A kill by Dooley closed out set two, 25-16.

Set three started off with a Jayhawk kill by Szabo, which started a 3-0 run for the Jayhawks. K-State tallied its first point of set three but Elnady and Langs shut down their next attempt with a double block, making it 5-2.

Kills by Langs, Bien, Turner, and Dooley put the Jayhawks ahead 11-5. Szabo collected her second round of back-to-back kills in the match, which forced a Wildcat timeout. K-State collected two more points, but Szabo and Turner came back with kills of their own.

The Jayhawks then went on a 5-0 run, their second highest of the night, which included two kills by Bien, two kills by Dooley and Szabo tallying her 12th kill. Sophomore London Davis and Swanson subbed back in and both collected a kill to close out the match, 25-15.

“Anezka Szabo set the tone on Sunday,” said Bechard. “She got right back into it today. Kennedy Farris is playing at a high level, too. Those two are really setting the tone and pace for our team.”

Kansas will hit the road to play No. 11 Baylor on Saturday (November 5) at the Ferrell Center in Waco, Texas. The match will be streamed on Big 12 Now on ESPN+ with first serve taking place at 2 p.m. CT.