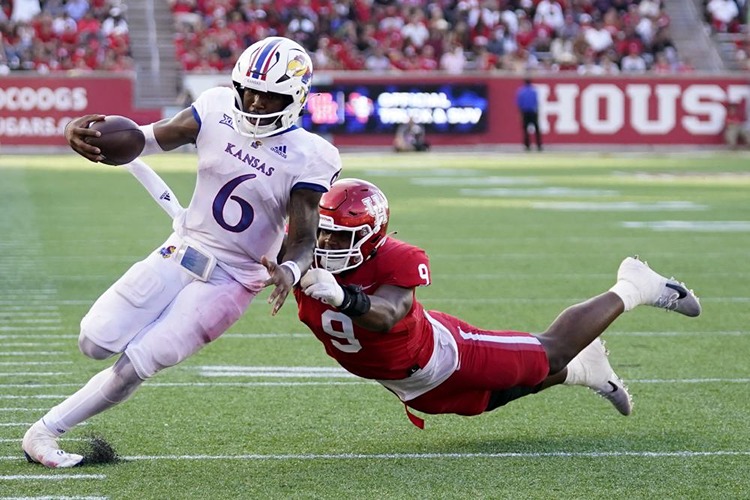 Line: Kansas by 7 1/2, according to FanDuel Sportsbook.

The Blue Devils are going for their first 4-0 start since 2018, when New York Giants quarterback Daniel Jones was under center and they last went to a bowl game. The Jayhawks are shooting for a perfect start for the first time since 2009, the year after their last winning season. It is one of four games involving unbeaten FBS teams this weekend.

Duke coach Mike Elko against Kansas coach Lance Leipold. Elko took over the Blue Devils this season after several high-profile stops as a defensive coordinator, and that side of the ball will be tested by QB Jalon Daniels and a prolific Jayhawks offense. Leipold has earned rave reviews from coaching peers for his job he’s already done in Year 2 in Lawrence.

Duke: DT DeWayne Carter is a two-time team captain, the first since Jones in 2017-18 to achieve that honor. He leads a defensive front that will try to slow down a Kansas rushing offense averaging 259.0 yards per game.

Kansas: RBs Devin Neal and Daniel Hishaw are a formidable 1-2 punch for the nation’s seventh-best rushing offense. Both have reached the end zone four times already this season.

Kansas beat Duke 44-16 in 2009 in the only meeting between the schools in Lawrence. … Elko is the first Duke coach to start 3-0 since Fred Goldsmith in 1994. He began 7-0 and led the Blue Devils to the Hall of Fame Bowl. … Duke QB Riley Leonard leads the ACC and is 15th nationally with 15.06 yards per completion. … Duke has 23 tackles-for-loss this season. Its opponents have 10. … The Blue Devils kept their opponents off the scoreboard for the first 78 minutes, 49 seconds of the season. Northwestern ended the streak in Game 2. … The Jayhawks are fifth nationally in scoring offense at 51 points per game. They have scored 22 touchdowns with two field goals. Their 159 points matched the 2007 team for the most through three games in school history. … Daniels has thrown for 556 yards and seven TDs while running for 244 yards and three TDs. … Kansas has not allowed a sack this season.