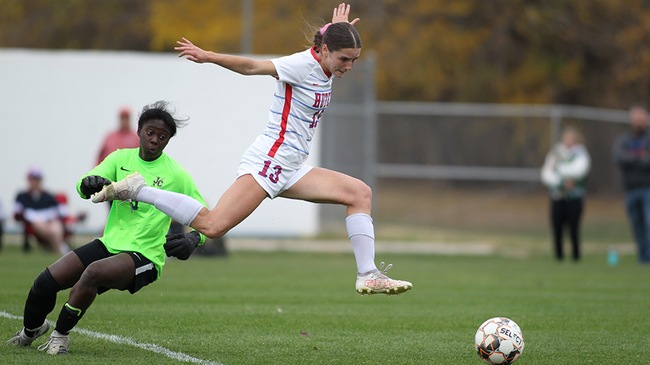 Hadlie Lowe leaps past Johnson County's goalkeeper to score her 20th goal of the season in a 4-3 Blue Dragon victory over Johnson County in the opening round of the Region VI Tournament on Sunday at the Salthawk Sports Complex. (Billy Watson/Blue Dragon Sports Information)

HUTCHINSON, Kan. – The No. 19-ranked Hutchinson Community College Women’s Soccer team scored the most goals ever in a matchup against Johnson County and needed every one of them to advance in the Region VI Tournament.

The Blue Dragons (14-3) advance to the Region VI Tournament semifinals at 4 p.m. on Thursday at the Stryker Soccer Complex in Wichita. Hutchinson will face No. 5 Butler, a 5-1 quarterfinal winner over Dodge City on Saturday in the quarterfinals.

The Blue Dragons led 2-0 at halftime on goals by Maher. She scored her seventh goal of the season – a career high for Maher – just 2:31 into the game when she took a Miller cross and scored in the lower left corner of the goal for a 1-0 lead.

After Lowe was taken down in the penalty box, Maher made it 2-0 with 24:21 to play in the half with her fifth career penalty kick.

The fireworks then began in the second half.

Just 1:24 into the half, Johnson County’s Alandra Bailey scored to cut the Hutchinson lead to 2-1.

The Blue Dragons regained a two-goal lead when sophomore Emma Scholl sliced a crossing pass into the goal for her third goal of the season. Miller was credited with her second assist of the game. Only 37 seconds later, Johnson County pulled within 3-2 on a Riley Porter goal with 21:30 to play in the second half.

The Dragons scored huge insurance goal with 3:44 remaining in the game when Lowe took a long pass from Jayda Wyatt and beat the Cavalier goalkeeper on a breakaway to give the Dragons a 4-2 lead.

The Cavaliers made one more run at the Dragons. Megan Everhart headed in a corner kick with 24 seconds remaining to cut the Dragon lead to 4-3.

Lowe’s goal became her sixth game-winner of the season and tied Melissa Hetherington for the career record with her 14th career game-winning goal. She also became the 13th Blue Dragon to score 20 goals in a season.