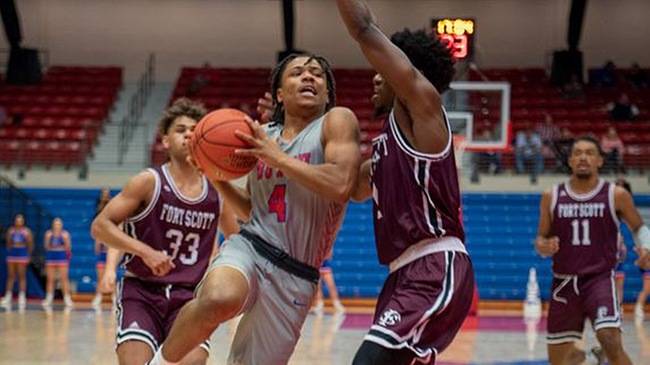 Ty Frierson scores a career-high 29 points, including the final 12 points of the as the No. 9-ranked Blue Dragons outlast Pratt 120-118 on Tuesday in Pratt. (Andrew Carpenter/Blue Dragon Sports Information)

PRATT, Kan. – Up-tempo from the opening tip, the Hutchinson Community College Men’s Basketball team had the finishing kick to fend off the Pratt Beavers on Tuesday night at the Beaverdome.

Aaron Franklin and Ty Frierson combined for 63 points, which offset the 49-point effort from Pratt’s Quintin Metcalf as the Blue Dragons defeated the Beavers 120-118.

The Blue Dragons improved to 8-1 overall and 2-1 in the Jayhawk Conference. Hutchinson plays host to Barton at 7:30 p.m. on Saturday in the Sports Arena. The Beavers dropped to 4-4 and 1-2.

There were several notable marks from Tuesday’s shootout:
+ The combined 238 points broke the all-time series record with Pratt, breaking the 1969 Region VI game of 222 combined points.
+ The 238 combined points were the third-most in Blue Dragon single-game history.
+ The 49 points scored by Metcalf tied the all-time single-game scoring record, originally set by Del Heidebrecht of Arkansas City Junior College in 1958.

Franklin posted his third 30-point game of the season with a team-high 34 points on 11 of 22 shooting. Franklin tied a career high with six 3-pointers on 16 attempts and was 6 of 6 from the free-throw line. Franklin added a team-high eight rebounds.

Frierson scored a career-high 29 points on 9 of 18 shooting and dished out six assists. Frierson also had a season-high four steals.

Metcalf hit 20 of 24 shots in his 49-point performance, also hitting 9 of 10 from the free-throw line. Chidiebere Obichere had 19 points on 8 of 10 shooting. Sterling Young scored 16 points and Jaylen Davis had 10 for the Beavers.

The game was back-and-forth from the opening tip with 13 of the game’s 17 lead changes occurring in the first half.

Pratt battled back to take a 41-39 lead on a Obichere dunk with 5:28 to play. Consecutive 3-pointers from Frierson and Franklin immediately gave the Dragons a 45-41 lead with 4:55 to play.

Landon Wagler scored inside with 27 seconds remaining to give the Dragons a 58-55 lead, but Pratt scored the final three points of the game to head into halftime tied at 58.

Frierson wound up scoring the final 11 Hutchinson points of the game. His 3-pointer with 2:41 to play snapped that Beaver run and gave the Dragons the lead for good. His layup with 52 seconds to go made it a two-possession lead at 117-112. Leading 119-116 with 5 seconds to go, Frierson hit 1 of 2 free throws to again make it a two-possession game.

GAME NOTES – The victory broke a Blue Dragon three-game losing streak at the Beaverdome. … This was all-time Blue Dragon win No. 1,882. … This was Hutchinson’s seventh 100-point game of the season and fourth game of 120 or more points. … The Blue Dragons are now 151-27 all-time against Pratt, including 67-14 at Pratt.