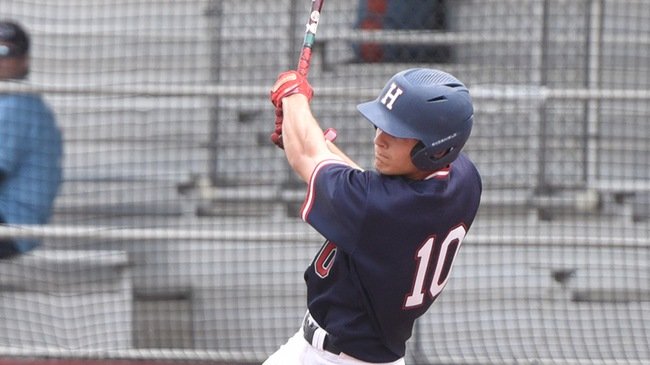 Blue Dragon designated hitter Braedyn Sommer was a combined 6 for 10 with three home runs and nine RBIs in a key doubleheader sweep of Pratt on Saturday at Stanion Field in Pratt. (Sammi Carpenter/Blue Dragon Sports Information)
PRATT
– The Hutchinson Community College bats exploded on Saturday in a crucial Jayhawk West doubleheader sweep of the Pratt Beavers at Stanion Field.

The Blue Dragons combined for 32 runs and 37 with and 19 extra-base hits, including six home runs as Hutchinson run-ruled Pratt 15-2 in five innings in Game 1 and outslugged the Beavers 17-12 in Game 2 to take its seventh-straight season series from the Beavers.

The Dragons are now tied for fourth place in the Jayhawk West with Butler with identical 16-12 records heading into the final week of the regular season. The Blue Dragons will play Dodge City next week, while Butler plays Garden City. The Hutchinson-Dodge City series starts at Cavalier Field in Dodge City Thursday and concludes at Hobart-Detter Field next Saturday.

Hutchinson is now a season-high nine games over .500 at 30-21. The Blue Dragons reach the 30-win plateau for the 28th time in program history and the eighth time in the Ryan Schmidt era.

Several Blue Dragons had big days at the plate in the final two games of the four-game series with the Beavers.

Braedyn Sommer
had a huge day going a combined 6 for 10 with three home runs, triple and nine RBIs.

Hunter Gotreaux
was 6 for 9 with two doubles, home run and six RBIs.

Ben McLaughlin
homered twice and had three doubles, going 5 for 10 with five RBIs. McLaughlin moved into sole possession of second place on the Blue Dragon career home run list with 29 home runs. He is now tied for ninth with Dylan Nedved for on the career RBI list with 67.

Sommer and McLaughlin, the Dragons’ Nos. 1 and 2 hitters in the lineup, were a combined 6 for 9 with six runs and six RBIs.

Gotreaux had a game-high five RBIs, going 2 for 3 with three runs scored and a stolen base. Gotreaux launched a three-run home run in Hutchinson’s seven-run second for a 9-0 lead. He added a two-run double in the fifth inning.


Jack Torosian
was on base in all four plate appearances, going 2 for 2 with two RBIs.

Cade Baker
was 2 for 2 with a double and RBIs.

Bryce Logan
drove in two with a bases-loaded hit by pitch and RBI single.

This was the 20th time in program history, the first since scoring 23 last season against Dodge City, the Blue Dragons scored 20 or more runs in a game.

Chase Torkelson
evened his season record at 4-4 with a complete-game performance. He allowed eight hits and three earned runs with two strikeouts and a walk.

GAME 2 RECAP
Sommer followed his big first game with his second multi-home run game of the season and a career-high seven RBIs.

He had a grand slam in the second inning and a three-run shot to center field in the seventh inning to finish 3 for 6.

Gotreaux tied a career high for hits, going 4 for 6 with a double, RBI and three runs scored.

McLaughlin homers in going 2 for 5 with an RBI. Torosian was 2 for 6 with a double, triple and two runs. Baker went 2 for 3 with three runs and a double with two walks.


Brady Beverman
(4-1) got the win with 3 2-3 innings of relief work. He allowed four hits and two earned runs while striking out four and walking two.

Reed Scott
had two scoreless innings of relief with a pair of hits and two strikeouts.

Kaden Wickersham
had to get the final two outs of the ninth. He struck out two.