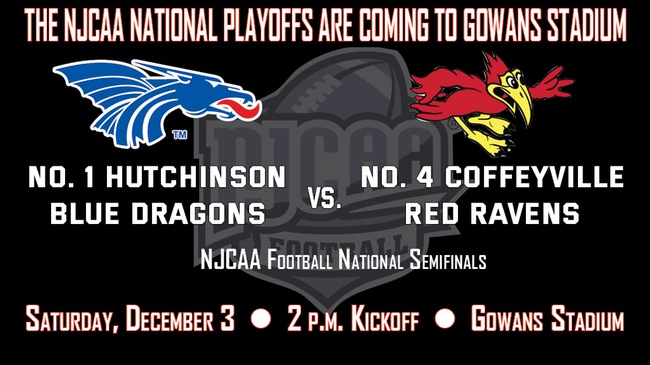 HUTCHINSON, Kan. – The official pairings for the NJCAA Division I Football National Semifinals have been released and one of the matchups will be an all-Jayhawk Conference showdown at Gowans Stadium.

The No. 1-ranked and top-seeded Hutchinson Community College Football team will play host to the No. 4 Coffeyville Red Ravens at 2 p.m. on Saturday, December 3 at Gowans Stadium in the first of two national semifinal games.

The other semifinal has No. 3 Iowa Western traveling to No. 2 Northwest Mississippi at 5 p.m. on Sunday, December 4 in Senatobia, Mississippi.

The semifinal winners will meet in the NJCAA Division I National Championship Game on Wednesday, December 14 at War Memorial Stadium in Little Rock, Arkansas.

Advanced ticket sales are already underway online. Tickets for the Hutchinson-Coffeyville semifinal are $15 advanced and $18 at the gate. All seating in Gowans Stadium will be general admission for this game. Blue Dragon All-Sports Tickets are not valid for the national semifinals. The ticket links are available on BlueDragonSports.com.

Both national semifinals will be streamed on ESPN+.

The Blue Dragons navigated a tough 2022 schedule as the only undefeated team in the NJCAA this season, winning the program’s 10th Jayhawk Conference title and third in a row.

Running back Dylan Kedzior came off the bench in the second half against Coffeyville and ignited the Blue Dragon offense. Kedzior rushed for 85 yards in the fourth quarter, including a 21-yard run that set up his 3-yard go-ahead touchdown with 1:17 remaining in regulation.

The Blue Dragons are making their second national playoff appearance in the last three seasons. The Blue Dragons ran the table two seasons ago, defeating Snow College 29-27 in the first national championship played in Little Rock on June 5, 2020.

The semifinal round was installed before last season and the Dragons were No. 5 in the final regular-season rankings, just one spot out of the playoffs. After a decisive win over Hinds in the Salt City bowl, the Blue Dragons finished No. 3 in the national rankings.

The Dragons have now reeled off 16-straight wins, the second-longest win streak in program history.

After starting this season 2-2, Coffeyville has reeled off six-straight wins to steadily climb up the NJCAA National Rankings. The Ravens moved into the No. 4 spot in the poll after a convincing final two weeks of the regular season – a 23-7 home when over previous No. 2 Iowa Western and a 30-21 road triumph at Garden City.

The national semifinal appearance will be the 25th NJCAA postseason game in Blue Dragon Football history. The Dragons have played in 23 bowl games previously and now two national playoff appearances.

This will be the third postseason meeting between Hutchinson and Coffeyville that didn’t involve the Jayhawk Conference/Region VI playoffs. The teams played in back-to-back Wheat Bowls in Wichita in 1948 and 1949. Coffeyville won the 1948 Wheat Bowl, 19-7. The teams tied 13-13 in 1948.

Hutchinson is 3-5 in eight KJCCC Playoff meetings with Coffeyville, going 3-0 at Gowans Stadium.

The most memorable of those three playoff meetings came in 1995 when the Blue Dragons, trailing 10-3 in the fourth quarter, ran a fake punt from their own 17 and converted on fourth-and-long. That successful fake ultimately led to a game-tying touchdown with 3 minutes left in regulation. The Blue Dragons won 17-16 in overtime when Coffeyville missed the potential game-tying extra-point try in the first overtime.