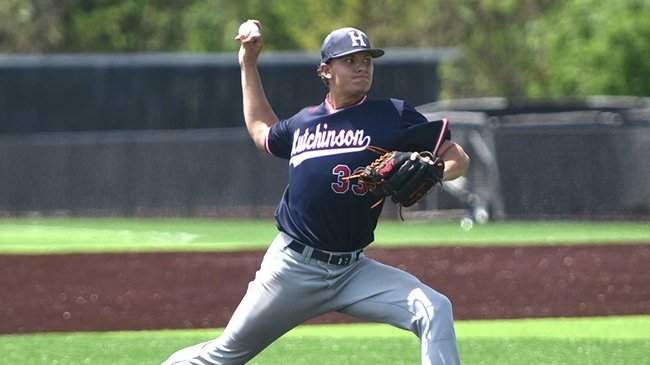 FORT SCOTT
– The Hutchinson Community College baseball team extended its winning streak and streak of scoring 10 or more runs to seven games each on Wednesday and took a 1-0 series lead over the Fort Scott Greyhounds in the opening series of the Region VI Baseball Tournament at Lions Field.

drove in two runs each as the Blue Dragons defeated Fort Scott 10-7 in Game 1.

McLaughlin extended his hitting streak to a career-long 14 games on Wednesday, going 3 for 6 with a pair of RBIs.

McLaughlin had a two-run single that capped a three-run fifth inning that pushed the Blue Dragon lead to 7-2.

Logan went 3 for 4 with two runs and an RBI. He doubled and scored in the second inning and had an RBI single in the third to give the Blue Dragons a 3-1 lead.

was on base all five times, going 2 for 2 with three walks.

hit his 19th home run of the season, a solo homer with two out in the seventh inning.

Sutcliffe is tied with McLaughlin and Brad Flanders (2002) for fourth on the single-season home run list. He now has 26 career home runs, which is tied for fourth with Michael Helman and Wyatt Divis on the career list.

The Blue Dragons took advantage of 11 Fort Scott walks and one key catcher’s interference against the Greyhounds. The 11 walks tied for the sixth in Blue Dragon single-game history.

Whitlock (8-3) gave up single runs in the first and fourth innings and then labored through the sixth as Fort Scott scored a pair on two hits, a walk and hit batter. Whitlock allowed eight hits and four earned runs with three strikeouts and three walks.

had to get the final two outs for his first career save.

Trailing 1-0 after one inning, the Blue Dragons responded when

hit a two-run single to left center for a 2-1 lead.

Leading 4-1 after four, the Blue Dragons took advantage of a two-out catcher’s interference call on Fort Scott when Sommer at the plate. McLaughlin grounded a two-run single through the right side and Sommer later scored on a passed ball to extend the Dragon lead to 7-4.

Hutchinson got some needed insurance with two out in the seventh. Sutcliffe homered to right and then Gotreaux drove a base hit to left that bounced over the head of the Fort Scott left fielder and rolled to the wall which allowed