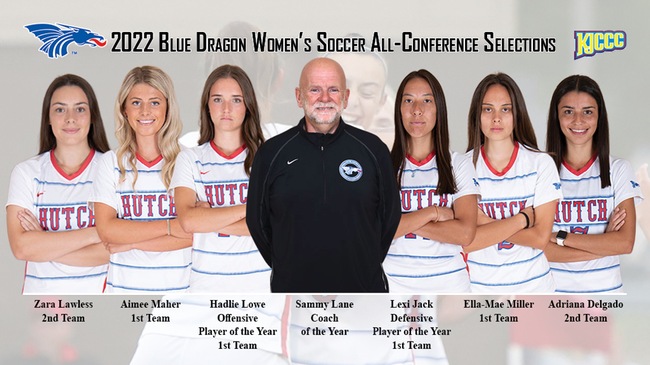 The Blue Dragons finished the 2022 season with a 14-4 overall record and a second-place finish in the Jayhawk West with 10-3. The Dragons advanced to the Region VI semifinals this season.

Lowe, a sophomore from Wichita, was the top scoring option for the Blue Dragons and posted career highs 20 goals, seven assists and 47 points. She had six game-winning goals this season.

Lowe had the first of her three hat tricks this season in the opener against Western Nebraska on August 26. She then scored a career single-game high four goals against Dodge City on Oct. 8 and followed that with three goals against Cowley in a 3-1 victory.

Lowe is the 13th Blue Dragon to register a 20-goal season, the first since Jordan Downing and Jazmin Hartshorn both did so in 2016.

LEXI JACK – DEFENSIVE PLAYER OF THE YEAR
Jack is the fifth Blue Dragon to earn Defensive Player of the Year honors, the first since goalkeeper Chiara Soergel in 2019. Jack is the first defender to win the honor for the Blue Dragons since Madison Pollack in 2016.

Jack, a two-year starter from Wichita, was one of the physical back-line defenders for the Blue Dragons, which had six shutouts this season and held opponents to one or no goals 12 times.

Jack was a big part of keeping two of the league’s top scorers off the sheet in four matchups this season – Barton’s Nina Norshee and Butler’s Kenzee Godwin, who had just one assist in two matchups.

SAMMY LANE – COACH OF THE YEAR
This is the eighth time that Hutchinson head coach Sammy Lane was named the league’s Coach of the Year, the first since 2016.

Picked to finish third in the Jayhawk West this season, Lane’s 2022 Blue Dragons got on an early roll and jumped out to a 7-0 start. The Blue Dragons became a ranked team for the first since 2017. The Blue Dragons remained in the national rankings for the remainder of the season, finishing at No. 19.

After suffering their first loss of the season, the Blue Dragons entered a four-game stretch against nationally ranked opponents and went 3-1 in that span. The signature wins were 2-1 in overtime over Coffeyville and a 2-0 shutout of Barton at the Salthawk Sports Complex on October 5.

AIMEE MAHER – 1ST TEAM
One of three three-year sophomores, Maher is a three-time all-league player, earning first-team honors this season and in 2021.

Maher, a sophomore midfielder from Greystone, Ireland, was the Blue Dragons’ second-leading scorer with eight goals and four assists for 20 points. She was a perfect 2 of 2 on penalty kicks this season.

Maher posted her first career hat trick and had a career-high seven points in a 6-0 victory over Dodge City on September 14. Her four assists tied a career high.

ELLA-MAE MILLER – 1ST TEAM
The second three-year sophomore, the defender from Devon, England, was part of a strong back line for the Blue Dragons. Miller is also a three-time all-KJCCC performer.

Miller had a career-high eight assists from the back line. She tallied two assists in a Region VI Tournament opening-round victory over Johnson County.

For her career, Miller had one goal and 14 assists.

ZARA LAWLESS – 2ND TEAM
The third three-year sophomore and three-year all-conference performer, Lawless served as the anchor of a strong defense for the Blue Dragons in 2022.

Lawless directed the defense, would take all the goal kicks and when a physical presence we needed, the sophomore from Dublin, Ireland, provided that as well.

Lawless had one goal and one assist this season and had two goals and three assists for her career.

Lawless was a big part of keeping the league’s top scorers in check. This season, Lawless blanked the nation’s leading scorer in Barton’s Nina Norshee off the scoresheet in two matchups this season.