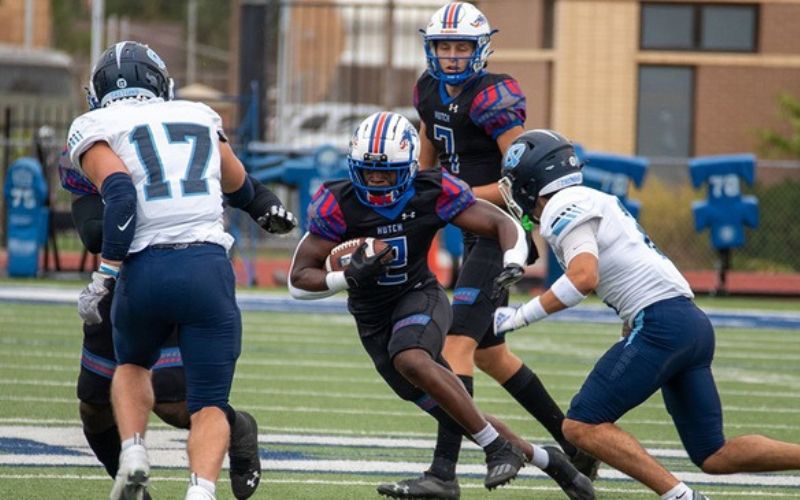 Starting the season with three victories, two against nationally ranked opponents, the Blue Dragons remained No. 2 in the latest NJCAA Division I Football Rankings released on Monday.

Hutchinson hits the road for its Jayhawk Conference opener on Saturday, opening the season at Coffeyville. The Blue Dragons and Red Ravens kick off at 7 p.m. Saturday at Coffeyville’s Veterans Memorial Stadium.

Coffeyville (2-1 overall, 2-1 Jayhawk Conference is receiving votes in the Week 4 rankings and are too coming off a bye week. The Red Ravens lost to Independence back on Sept. 10 in an 18-5 home loss to the Pirates.

Last season, the Blue Dragons opened the 2021 season at Coffeyville as the preseason No. 1-ranked team and was stunned 17-10 by the eventual regular-season Jayhawk Conference champions. The Blue Dragons were held to their lowest point total of the season and couldn’t overtime seven turnovers.

Defending national champion and current No. 1 New Mexico Military Institute (4-0) survived a scare from now-No. 9 Kilgore (2-1) on Saturday following a come-from-behind 31-24 victory, scoring 28 in the second half after being down 14-3 at the break on the road.

Iowa Western, Northwest Mississippi and Jones were teams three through five in the latest rankings. Butler remained at No. 10 with Coffeyville and Independence receiving votes this week.

The Blue Dragons have been ranked in nine-consecutive polls dating back to last season.