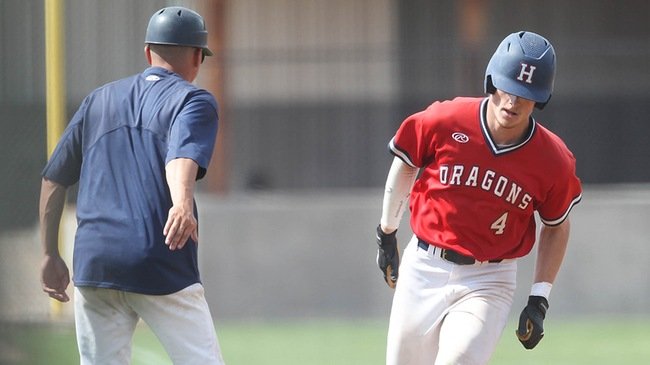 Sterling Sutcliffe is congratulated by third-base coach Toby Cornejo after his second of three home runs in Thursday’s doubleheader split with Pratt at Hobart-Detter Field.

continued his power surge and

twirled his fourth Jayhawk West complete game of the season on Thursday at Hobart-Detter Field, but the Hutchinson Community College baseball team managed only a split of the first two games of a four-game series with Pratt.

Whitlock got early run support from a first-inning Sutcliffe three-run home run as Hutchinson opened the series with a 9-2 victory over the Beavers. Sutcliffe hit two more homers and drove in four runs in Game 2, but it wasn’t enough as Pratt snapped a seven-game losing streak to the Blue Dragons with a 5-4.

Sutcliffe is now tied with Tim Olson (1999) and Michael Helman (2017) for fifth on the Blue Dragon single-season home run list.

GAME 1 RECAP
Whitlock improved to 6-3 for the season to lead the Blue Dragons in the opening game of the series.

Whitlock faced the minimum through four innings, getting a double play to erase a second-inning leadoff single. He struggled with his command through the final three innings, allowing single runs in the fifth and sixth innings.

For the game, Whitlock allowed six hits, two earned runs and a walk while striking out five.

Sutcliffe gave him a three-run homer to center in the first inning.

launched a two-run home run in the second inning and

singled home Sutcliffe in the third inning to build a 6-0 lead. Leading 6-1 in the fifth,

highlighted a three-run inning for a 9-1 lead.

also had two hits in the game.

GAME 2 RECAP
Pratt built a 5-1 lead through 4 1/2 innings on the power of two Michael Acosta home runs. The Beavers then had to hold on as the Dragons stranded six of their 11 runners left on base in the final four innings – five runners were stranded in the eighth and ninth innings.

Sutcliffe was 3 for 2 for with two homers and a triple to lead the Blue Dragons. Sutcliffe drove in all four Blue Dragons runs in Game 2. He hit a solo home run in the second inning to cut the Pratt lead to 3-1. His two-run triple in the fifth trimmed the Pratt lead to 5-3. He led off the eighth with a home run to close within 5-4.

The 11 total bases by Sutcliffe tied Kori Jensen (2007) and Jake Schleppenbach (2014) for fifth most in Blue Dragon single-game history.

had the only other multi-hit game for the Dragons going 2 for 5 with a pair of infield hits and a stolen base.

(1-1) took the loss on the mound. He struck out six over four innings and allowed four hits – two were homers by Acosta – walked none, but hit two batters.

Underdog Hesston Gets Clutch Performances for 3A Golf Crown