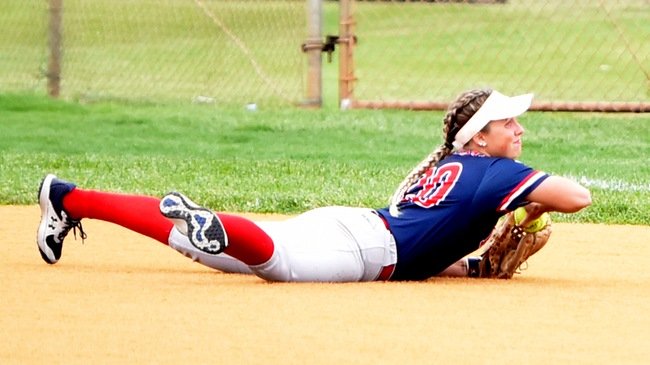 Blue Dragon second baseman Ella Dougherty tries to get the ball out of her glove and flip the ball to first to double off a runner after making a diving catch in the first inning of Hutchinson’s 5-2 loss to Seward County in the Region VI Tournament Losers’ Bracket final on Sunday in Dodge City. (Steve Carpenter/Blue Dragon Sports Information)
By Hutchinson CC Sports Information
DODGE CITY
– One of the best seasons in Hutchinson Community College softball history came to a close on Sunday as sixth-seeded Seward County upset the No. 15 Blue Dragons for a second-straight day in the Region VI Softball Tournament on Sunday at Legends Park.

hit an opposite-field home run to left to tie the game.

The game remained tied at 1-1 into the sixth inning. Seward County loaded the bases with three-straight hits before Low lined a rise ball over the center-field fence for a grand slam and a 5-1 lead.

Hutchinson cut the Saints’ lead to 5-2 when

led off the bottom of the seventh of a solo home run to left field. The Blue Dragons brought the tying run to the plate with one out, but Seward County rolled a game-ending 1-6-3 double play to close out the Blue Dragons.

Each team had nine hits.

had two hits each to lead the Blue Dragons, who left seven runners on base.

started in the pitching circle for the Blue Dragons and allowed a run in two innings.

pitched a scoreless seventh for the Blue Dragons.