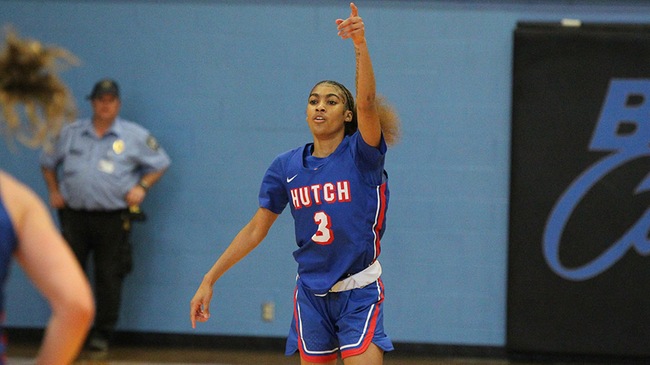 Journey Armstead scored a season-high 23 points to lead the No. 5-ranked Blue Dragons to a 74-63 over Labette on Friday at the Barton Classic in Great Bend. (Billy Watson/Blue Dragon Sports Information)

That lead dwindled to a scant two points with 8:15 to play in the fourth quarter. Then Blue Dragon All-American Mya Williams caught fire, scoring 14 points in the final 8 minutes to help the Blue Dragons pull away for a 74-63 victory over the Cardinals.

The Blue Dragons improved to 5-0 to start the season and will play their final non-conference game on at 1 p.m. on Saturday against the Redlands Cardinals.

Morgan Browning‘s jumper with 7:07 to play in the second quarter capped a 14-3 run to help the Blue Dragons build a 33-13 lead. Browning’s basket turned out to be the final field goal of the first half for Hutchinson. Labette closed the first half on a 12-2 run to slice the Dragon lead to 35-25 at halftime.

Journey Armstead had six points during a Dragon 8-0 run in the third quarter that pushed the advantage of 13 points at 43-30 with 6:07 to play in the period. Labette once again surged and pulled within 50-47, but Browning hit a 3-pointer with 2 seconds remaining to give the Blue Dragons a 54-47 lead after three quarters.

Labette scored the first four points of the final quarter and pulled within 53-51 with 8:15 remaining. Williams then took over. Williams hit two 3-pointers and Kali Howard added a 3-pointer. When Williams scored with 4:00 minutes to play, the Dragons regained control with a 68-55 lead.

Williams had her fifth-straight 20-point game to start the season, finishing with 21 points. Williams was 4 of 9 from 3-point range. Her fourth 3-pointer of the game was the 100th of her career, making her the 13th Blue Dragon to reach that milestone. Williams had a team-high-tying six rebounds.

GAME NOTES – The Blue Dragons won their fourth-straight game over Labette and is 19-6 all-time against the Cardinals. … The Dragons have had 10 or more 3-pointers in 3 of 5 games this season. … The 74 points scored on Friday are a season low for the Blue Dragons.