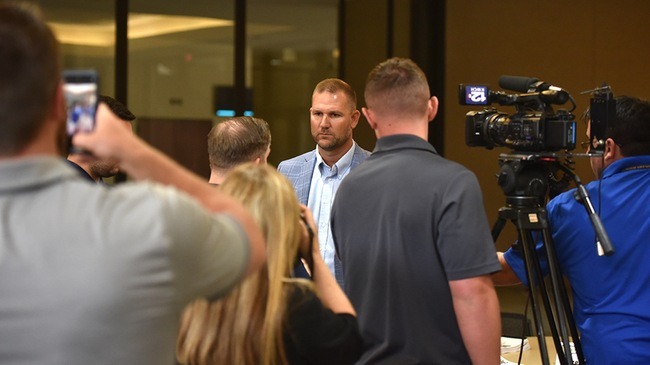 The preseason coaches’ poll was announced on Friday at the annual KJCCC Football Media Day at Century II in Wichita.

Now a seven-team conference with Fort Scott no longer playing football, the Blue Dragons were the top pick of conference coaches followed by Garden City and Independence. The rest of the KJCCC predicted order of finish was Coffeyville fourth, Butler fifth, Dodge City sixth and Highland seventh.

“We are excited about the season, third-year Blue Dragon coach Drew Dallas said. “Having a target on our back is nothing new. We know that each week everybody is going to bring their best and we have to make sure we do the same thing.”

Also announced at media day was the predicted order of finish for the Iowa Community College Athletic Conference as the Kansas-Iowa scheduling alliance resumes after a two-season hiatus because of the Covid-19 pandemic.

Iowa Western, the 2021 national runner-up, was picked to win the ICCAC this season, followed by Iowa Central and Ellsworth. All three ICCAC coaches also spoke at media day.

The Blue Dragons – the 2020-21 KJCCC league and NJCAA national champion and 2021 KJCCC Playoff champion – come off a 9-2 season in 2021 that ended on a six-game winning streak. The Blue Dragons tied Garden City for third in the KJCCC regular-season standings and then cruised through the KJCCC Playoffs, defeating Highland, No. 5 Independence and No. 11 Garden City by a combined score of 168-19. The Dragons finished off the season with a 66-34 win over No. 8 Hinds in the Salt City Bowl.

“The returners that we have, we have a lot of guys with some experience,” Dallas said. “We have a lot of guys who redshirted and have been in our program, but adding the new guys to the mix and creating competition at every position group, now we have to find out the identity of our football team and that starts Monday.

Offensively, all eyes will be on quarterback Dylan Laible and receiver Malik Benson.

Laible (6-5, 190, Little Elm, Texas) is a third-year sophomore who has 15 start in his Blue Dragon career. One start was in the 2020-21 NJCAA national championship game against Snow College.

Benson (5-11, 185, Lansing, KS) made a huge splash in the second half of his freshman season. The first-team All-American receiver set a Blue Dragon single-season record 1,229 on 43 receptions and 11 touchdowns. Benson is now committed to Alabama for next season.

“I love our team,” Dallas said. “I love how they work. I love how they go about their business. They raised themselves to a standard and don’t waiver from it each and every day.

“That part of it is fun and reassuring as a coach that I know we are going to get their best every day that we are out there.”

The Blue Dragon open the 2022 season with a 1 p.m. kickoff against Navarro College at Gowans Stadium on August 27. The Dragons open conference play at Coffeyville on September 24. The first conference game at Gowans will be Butler on October 1.