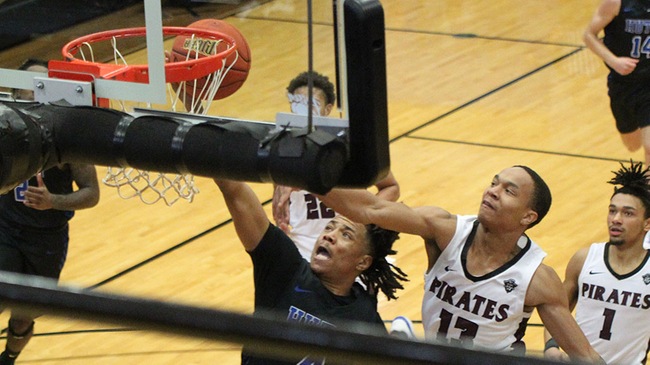 Ty Frierson is one of two Blue Dragons to score 19 points as the No. 6-ranked Blue Dragons defeated Victoria College 121-95 on Friday in Great Bend. (Billy Watson/Blue Dragon Sports Information)

GREAT BEND, Kan. – The No. 6-ranked Hutchinson Community College reached the 100-point mark for a program record fifth-consecutive time on Friday in a 121-95 victory over Victoria College at the Barton Classic.

Now 5-0, the Blue Dragons will play Wilber Wright College at 3 p.m. on Saturday at the Barton Gym in Great Bend in the final non-conference game of the season. The Dragons open Jayhawk Conference play on Wednesday at the Sports Arena against Independence.

The Blue Dragons broke the 120-point mark for the third time in five games on Friday, hitting 14 3-point goals and placing seven players in double figures.

Ty Frierson and Aaron Franklin led the Blue Dragons with 19 points each. Frierson was 7 of 9 shooting with a pair of 3-pointers. Franklin scored six of his 19 points in the second half. Franklin added seven rebounds, four assists and four steals.

Aaron Potter had 14 points and six rebounds off the bench. Jackson Leyba hit three 3-pointers and finished with 12 points. Jayden Garrison had 11 points. Kernan Bundy and Antonio Green finished with 10 points each.

Chandler Collins-John scored 29 points with eight rebounds on 14 of 20 shooting. Markhi Strickland had 21 points and 10 rebounds.

The Dragons upped the lead to 20 after back-to-back hoops by Frierson and Garrison for a 63-43 lead. The Dragons led 63-46 at halftime.

Hutchinson started the second half with 3-pointers from Kernan Bundy and Franklin and a Frierson jumper with 18:54 to play bumped the Dragons a 71-46 lead. The Blue Dragon lead reached 30 for the first time with 10:41 left on a Potter jumper for a 98-67 lead.

The Blue Dragons outscored Victoria 58-49 in the second half.

GAME NOTES – This as the first-ever meeting between Hutchinson and Victoria. … The Blue Dragon bench produced 59 points. … Victoria is the fourth opponent in five games this season to shoot better than 50 percent in the second half.