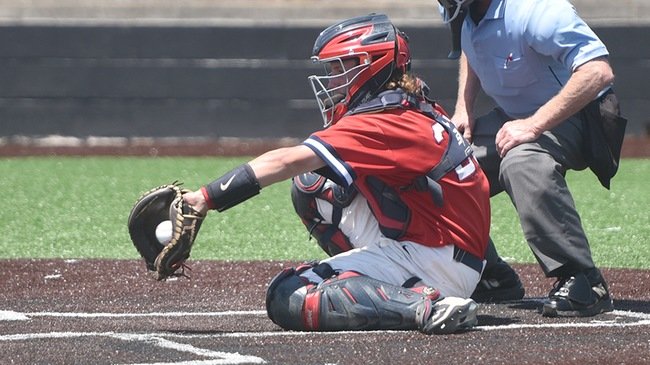 Catcher Cade Baker had three hits, including a two-run home run, with three RBIs in Hutchinson’s 9-8 victory in 10 innings in the opening round of the Plains District Tournament on Tuesday in Manhattan (Steve Carpenter/Blue Dragon Sports Information)

Kael Babin
‘s bases-loaded walk in the top of the 10th inning forced in the go-ahead run and the Hutchinson Community College baseball team made it stand up to defeat the Barton Cougars on Tuesday in the opening round of the Plains District Tournament at Tointon Family Stadium.

The 10th-seeded Blue Dragons won their season-high ninth game in a row to advance in the winner’s bracket of the eight-team double-elimination tournament with a 9-8 victory in 10 innings over the second-seeded and Jayhawk West champion Cougars.

The Blue Dragons (37-21) advance to the winners’ bracket semifinals to play third-seed Kansas City at approximately 6 p.m. on Wednesday.

The game was tied four times, including 8-8 in the eighth when Barton scored a pair of runs. The Blue Dragons avoided more damage after


Ryan Henderson
led off the 10th inning with his third hit of the game. A walk to

Cade Baker
loaded the bases with two out and then on a 3-1 pitch, Babin walked to force in Henderson and give the Blue Dragons a 9-8 lead.

Barton had two a pair of 10th-inning baserunners on walks, but Covey recorded a strikeout to end the game. The Blue Dragons are now 3-2 in extra-inning games this season.

Covey (3-0) pitched the final 2 2-3 innings to earn the victory. He allowed one hit and two walks with one strikeout.

Hutchinson out-hit Barton 15-11, getting three hits each from Henderson and

Henderson went 3 for 6 with an RBI single in the sixth inning that tied the game at 5-5.

Baker was 3 for 4 with three RBIs. He had a sacrifice fly in the second inning that scored

Jack Torosi
an to tie the game at 2. Baker then hit a go-ahead two-run home run in Hutchinson’s three-run seventh inning that gave the Blue Dragons a 7-6 lead.


Ben McLaughlin
, Torosian and Babin had two hits each.

McLaughlin extended his hitting streak to 16 games, going 2 for 4 with an RBI, double and a run scored. Torosian was 2 for 6 with a double, two runs and two RBIs. Babin was 2 for 3 with two walks, one hit-by-pitch with a run and RBI.


Braedyn Sommer
extended his hitting streak to 11 games and

Jack Whitlock
grinded out six innings with nine hits and six earned runs allowed. He struck out one and walked four.