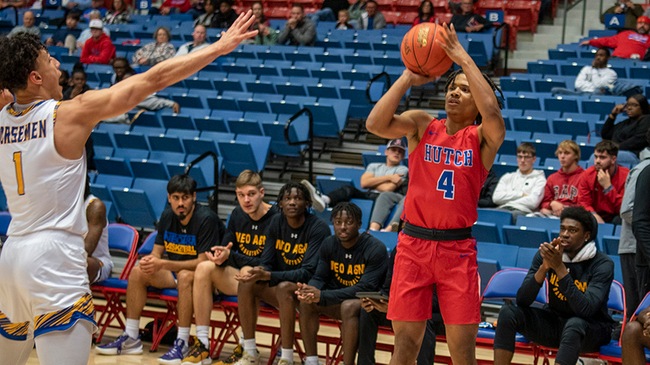 Ty Frierson buries one of his six 3-pointers in the No. 13-ranked Blue Dragons' 117-107 BSN Sports Classic victory over NEO on Saturday at the Sports Arena. (Andrew Carpenter/Blue Dragon Sports Information)

HUTCHINSON, Kan. – Freshman Ty Frierson hit six of the Hutchinson Community College men’s basketball team’s 16 3-pointers against NEO as the No. 13-ranked Blue Dragons held on for a 117-107 victory on Saturday in the final game of the BSN Sports Tipoff Classic at the Sports Arena.

The Blue Dragons improve to 3-0 to start the season. Hutchinson will play Labette at 7:30 p.m. on Wednesday at the Sports Arena.

Frierson is the third Blue Dragon already this season to hit six or more 3-pointers in a single game. The 16 made 3’s for the Blue Dragons are the second most in single-season history, bested only by the 16 3-pointers made four days before against Fort Scott.

Frierson became the third-different player in as many games to lead the Blue Dragons in scoring. The freshman guard hit 9 of 16 overall shots, including 6 of 12 from distance, to score a season-high 25 points.

Frierson scored seven first-half points as Hutchinson lead 57-50 at intermission. Frierson then scored 10 points, including three 3-pointers, in the first 4:49 of the second half to key an 18-10 run to start the second half for a 75-60 lead.

Redshirt freshman Aaron Franklin had his third-straight 20-point game and posted his first career double-double with 20 points and a career-high 12 rebounds. Franklin also had five assists. Franklin was 9 of 20 shooting with a pair of 3-pointers.

Freshman Jackson Leyba provided a huge spark off the bench in the first half with 16 points on 3 of 7 shooting from 3-point range. The Dragons trailed 8-0 when Leyba came into the game. Leyba scored five points and made numerous hustle plays to spark a 28-5 Dragon run to turn the game around. Jackson’s two free throws capped the run and gave the Dragons a 28-15 lead with 8:42 left in the first half.

Freshman Antonio Green had his first career double-double with 12 points and 12 rebounds. Aaron Potter finished with eight points, while Kernan Bundy, Ra’Sean Frederick and Jayden Garrison had seven points each.

A Trey McClure free throw with 3:48 left in the period gave the Dragons a 45-33 lead, but NEO scored seven in a row to pull within 45-40 with 2:52 left. Bundy countered that advance with a three-point play and 1 of 2 technical free throws.

NEO pulled within 53-47, but free throws from Green with 1:06 left and Leyba with 33 seconds left pushed the lead back to 10. Wright hit a 3-pointer with 4 seconds left in the half and Hutchinson led 57-50 at halftime.

The Dragons held off NEO with 8 of 8 shooting from a foul line and a Franklin layup.

GAME NOTES – The Blue Dragons have won nine games in a row against NEO and are now 18-8 overall, including 14-4 in games played in Hutchinson. … Ty Frierson’s six 3-pointers ties for the seven-most made treys in single-game Blue Dragon history. … Franklin has scored 80 points in his first three games of the season. … The 117 points scored vs. NEO is the most in series history by the Blue Dragons. The 224 combined points scored are also the most in series history.