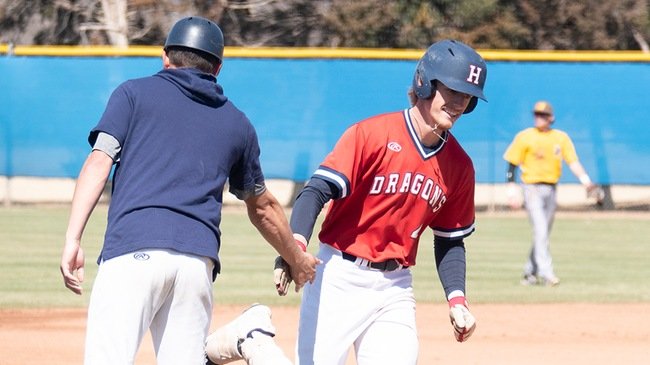 
FORT SCOTT –
The Hutchinson Community College baseball team will start the postseason on the road Wednesday when the Blue Dragons take on the Fort Scott Greyhounds in the opening round of the Region VI Tournament.

The 10th-seeded Blue Dragons and seventh-seeded Greyhounds will play a best-of-3 series for the right to advance to the eight-team Central District Tournament next week at Tointon Family Stadium in Manhattan.

All three games of the opening-round series will begin at 1 p.m. with Games 1 and 2 on Wednesday and Thursday and the Game 3, if necessary, on Friday. The Hutchinson-Fort Scott winner will play the Barton-Labette series winner next Tuesday in Manhattan.

All games will be streamed live by Fort Scott video.

The Blue Dragons enter the postseason on a six-game winning streak and 13 wins in their last 16 games. Over that span, the Blue Dragons are averaging 11.6 runs per game – Hutchinson has scored in double figures in six-straight games – and hitting .389 as a team with 29 home runs. The Blue Dragons, in the first 39 games of the season were hitting only .298 and averaged 7.4 runs per game.

The Dragons pitching staff are allowing 7.6 runs per game with an opponent batting average of .290. In the first 39 games, the Dragon team ERA was 7.07.

is hitting .396 with seven home runs and 30 RBIs. Right-fielder

On the mound, the Blue Dragons are led by starter

has a team-high four saves.

Freshman Jesse Moreno is the top pitcher for the Greyhounds with a 6-2 record and a 6.02 ERA.

The last time Hutchinson and Fort Scott played in the postseason was the opening round of the 2019 Central District Tournament when the Blue Dragons defeated Fort Scott 15-2 in five innings at Eck Stadium in Wichita.

The Dragons and Greyhounds met in a best-of-3 opening-round series only once since this format started in 2004. Fort Scott came to Hobart-Detter Field and defeated the Blue Dragons in two games in 2015.