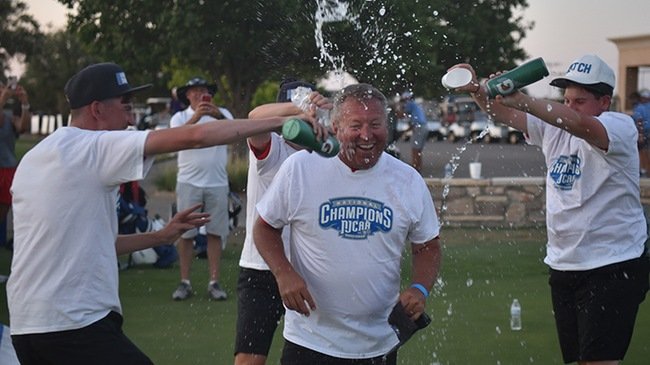 There was no such drama on Friday at the Odessa Country Club.

Leading by 15 strokes to start the day, the Blue Dragons continued their four-round domination of the 2022 Championship and won their second-straight national title with a 20-stroke victory.

was a third-team All-American.

The Blue Dragons counted scores from Crockett, who had two eagles and shot a 4-under 68. Alonzo had six birdies in a 2-uner 70 round. Clemons shot a 71 and

Clemons completed an outstanding tournament and tied Pittman at 7-under 281. Clemons was one stroke off the pace heading into No. 17. Hitting from the left rough from 117 yards out, Clemons drilled a shot within 4 feet and sank it for birdie to tie for the lead.

Clemons and Pittman both birdied the first playoff hole on No. 16. Pittman parred the second hole as Clemons hit a fairway bunker on his tee shot and still nearly got up-and-down for par to extend the playoff.

Partridge was almost a part of the playoff, but a bogey in the 72nd hole. Partridge had an incredible up-and-down for par on No. 17 to keep him tied for the lead. Partridge had one birdie and three bogeys.

Alonzo posted his best score of the tournament with six birdies and four bogeys in a 2-under round of 70. Alonzo tied for 26th with a 72-hole score of 3-over 291.