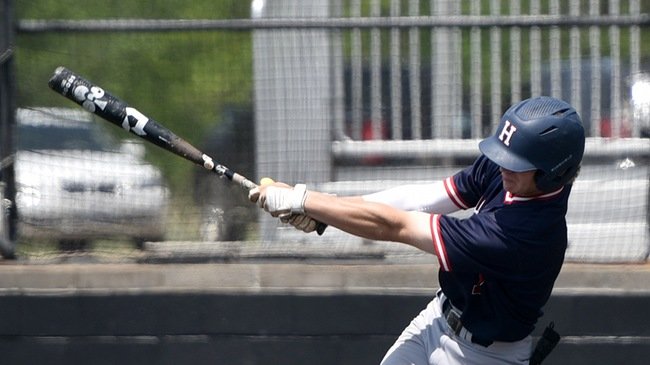 Jack Torosian had one of five hits the Blue Dragons were limited to by Kansas City pitching in a 7-2 Plains District Tournament loss on Wednesday in Manhattan. (Steve Carpenter/Blue Dragon Sports Information)
By Hutchinson CC Sports Information
MANHATTAN
– The Hutchinson Community College baseball team was held to five hits by three Kansas City pitchers and the Blue Dragons dropped to the elimination bracket of the Plains District (Region VI) Tournament at Tointon Family Stadium.

Kansas City, ranked No. 17 in the final NJCAA rankings with a 49-10 record, took a 2-0 lead after one inning and never relinquished that lead.

The Dragons pulled within 2-1 in the second when

Sterling Sutcliffe
to score, pulling the Dragons within 3-2.

The Blue Dragons left six runners on base in the first three innings. They had just two baserunners altogether over the final six innings – a two-out walk to

Ben McLaughlin
in the fourth and a one-out double by

Cade Baker
in the sixth. KCK pitchers retired the final 11 Blue Dragon batters of the game.

Baker and Torosian both doubled for the Blue Dragons.

Braedyn Sommer
, Sutcliffe and Gotreaux all had singles.