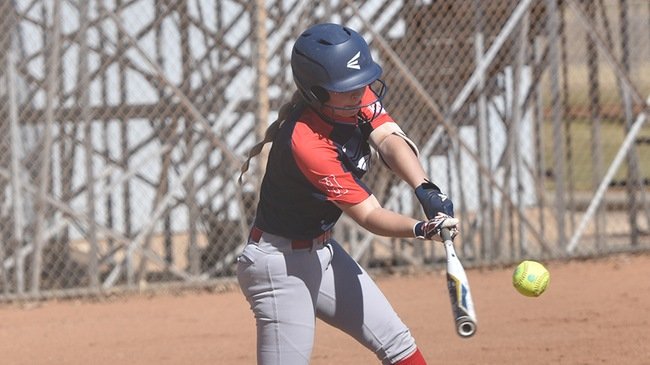 Easton Swanson had the go-ahead single in the top of the seventh in Game 2 to lead the No. 15 Blue Dragons to a sweep of Seward County, 4-0 and 7-6, on Wednesday in Liberal. (Steve Carpenter/Blue Dragon Sports Information)


‘s go-ahead RBI single in the top of the seventh inning of Game 2 against Seward County pushed the No. 15-ranked Hutchinson Community College softball team to a KJCCC doubleheader sweep and a 10-game winning streak on Wednesday.


combined for a three-hit shutout in the Blue Dragons’ 4-0 win over the Seward County Saints in Game 1 at French Family Field. Swanson’s go-ahead single in the top of the seventh broke Game 2’s second tie and was the difference in a 7-6 Blue Dragon victory.


The 36 wins tied the 2006 Blue Dragons for the seventh-most wins in a season in program history. The Dragons have won 10 games in a row – the second win streak of 10 or more games this season – and have won 23 of their last 25 games.


Hutchinson will close out the regular season with a doubleheader on Saturday at Pratt.

The Blue Dragons had leads of 4-0 and 6-4, only to have Seward County battle back and tie the game on both occasions.


Wertz led off the seventh inning with a single and was pinch-ran for by Lexi Pitcher. With two out and Pitcher still at second, Swanson hit a sharp groundball through the left side of the infield to score Pitcher for a 7-6 Blue Dragon lead.


Wertz, who entered the game in the bottom of the fourth, retired the Saints in order in the seventh inning to earn the pitching victory and improve her season record to 12-1.


Hutchinson took a 4-0 lead when Wertz hit a grand slam to left field in the third inning. Seward County tied the game at four with four runs in the fourth inning, which snapped the Blue Dragon pitching staff’s consecutive scoreless streak at 19 innings.


The Blue Dragons scored single runs in both the fifth and sixth innings. Goetz broke the 4-all tie with a two-out RBI single in the fifth for a 5-4 lead. The Dragons took a two-run lead in the sixth when


grounded out to third to score


Swanson had her third career three-hit game, going 3 for 4 in Game 2 with three singles and her go-ahead hit in the top of the seventh. Swanson’s three hits are a season high for the sophomore outfielder.


Wertz was 3 for 3 with the team’s second grand slam this season – Goetz had the other grand slam, which came against the Ottawa JV on January 29. Wertz struck out five in 3 2-3 innings to up her season total to 140. Wertz moved past Elise Beguelin for ninth on the Blue Dragon single-season strikeout list. Wertz allowed three earned runs on two hits and three walks.

Munson and Wertz combined for the Blue Dragons’ ninth shutout of the season in the opener.


Munson improved to 8-0 for the season with 5 1-3 shutout innings. She allowed three hits and one walk while striking out four.


Wertz extended her Blue Dragon single-season and career records for saves with her eighth of the season. She retired all five batters she faced with three strikeouts.


had the only multi-hit game, going 2 for 4 with a pair of single and a run scored. Wertz broke a 12-game streak without a home run, going 1 for 3 with a homer to left field.


The Blue Dragons took a 2-0 lead in the top of the first when Dougherty scored on a passed ball and Grimes’ groundout plated Miller. An error off the bat of Bevan scored Miller in the fifth inning. Wertz then homered to lead off the sixth for a 4-0 lead.


Miller had a bunt single in the first inning, her 22nd bunt for a base hit this season.