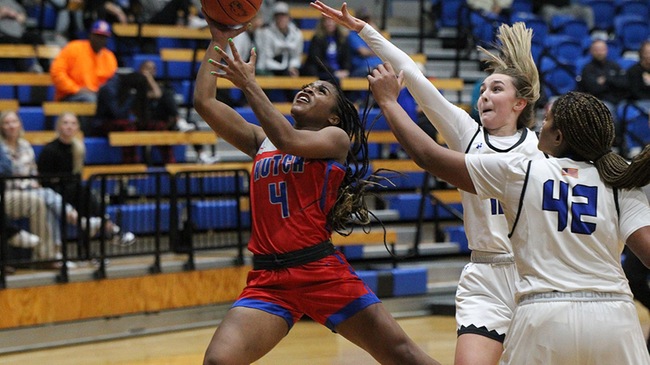 Morgan Browning drives to the hoop for two of her career-high 19 points to lead the No. 12-ranked Blue Dragon women to a 74-57 victory over Pratt on Tuesday in Pratt. (Billy Watson/Blue Dragon Sports Information)

PRATT, Kan. – Trailing by four points after one quarter, the Hutchinson Community College Women’s Basketball team outscored Pratt by 21 points over the final three quarters and extended its winning streak over the Beavers to 16 games on Tuesday at the Beaverdome.

Sophomore Morgan Browning scored all of her career-high 19 points in the second half and Leata Te-Nana Williams provided a late burst of energy in the final minute of the second quarter to lead the No. 12-ranked Blue Dragons to a 74-57 victory over the Beavers.

Hutchinson improved to 8-1 overall and 2-1 in the Jayhawk Conference. The Blue Dragons play host to No. 15 Barton at 5:30 p.m. on Saturday at the Sports Arena.

The Blue Dragons extended that 9-0 run to end the first half to 17 unanswered points with an 8-0 run to begin the third quarter. Browning capped the run with a steal and layup to build a 43-27 lead with 6:05 remaining in the quarter. The Blue Dragons held Pratt scoreless for 7 minutes, 33 seconds.

Pratt got as close as nine on two different occasions in the second half. Each of those runs were snapped by Browning. She had a personal eight-point run with two 3-pointers and two free throws to extend the Dragon lead to 60-43 with 7:02 remaining in the game.

Both Kali Howard and Monae Duffy posted double-doubles in the victory.

Mya Williams finished with 15 points and six rebounds. Journey Armstead had six points and tied a season high with 10 assists.

Princess Anderson had 21 points on 13 of 16 shooting from the free-throw line to lead the Beavers. Emily Acton had 13 points.

GAME NOTES – The Blue Dragons are now 85-11 all-time against Pratt, including 41-6 in Pratt. … This was all-time Blue Dragon win No. 1,060. … This was Hutchinson’s third game of 50 or more rebounds. … The four Pratt 3-pointers, tied an opponent season low and the 21 Beaver free throws are the most by an opponent this season. … Mya Williams surpassed the career 800-point mark, now with 811 points, and is now 20th on the career scoring list.