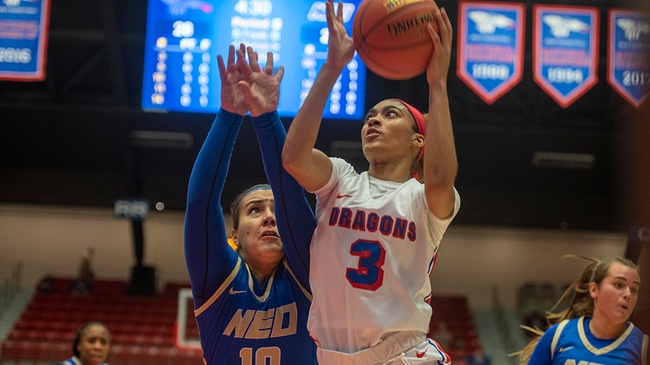 Freshman Journey Armstead has season highs of 14 points and seven assists as No. 9 Hutchinson defeats NEO 84-61 in the BSN Sports Tipoff Classic on Saturday at the Sports Arena. (Andrew Carpenter/Blue Dragon Sports Information).

Three players score in double figures to pace the Blue Dragons to an 84-61 victory over the Golden Norse. The Dragons outscored NEO 29-14 in the third quarter to extend a five-point halftime lead to a 20-point cushion entering the fourth quarter.

The Blue Dragons move to 3-0 after one week of the regular season. The Dragons will play host to the Washburn University Junior Varsity at 5:30 p.m. on Wednesday at the Sports Arena. NEO fell to 0-2.

Hutchinson scored the first eight points of the third quarter. Monae Duffy and Kali Howard hit jumpers, while Mya Williams and Howard combined for four free throws to extend the Dragon lead to 46-33 with 7:12 remaining in the quarter.

Williams scored 21 points for the third-consecutive game to lead the Blue Dragons offensively. Williams had her career game with at least five 3-pointers, going 5 of 11 from distance. Williams added five rebounds and two assists.

For the third-straight game, Howard posted a career-high single-game performance, going for 18 points on 7 of 12 shooting. She just missed on her third-straight double-double with eight rebounds and two blocked shots.

Hutchinson jumped out to a 7-1 lead after just 2 minutes, 49 seconds after two Armstead free throws. The Dragons went without and field goal and had only three free throws over the next 4:04 and the Norse took an 11-10 lead after a Jada Hytche 3-pointer with 4:28 to play in the period. The Dragons answered back with an Armstead 3-pointer with 4:07 remaining in the period. Hutchinson led 18-14 after 10 minutes.

Howard scored the first five points on a three-point play and short jumper to extend the Dragon lead to 23-14 and then built a 10-point lead for the first time with a Ziya Simms‘ free throw with 6:22 to play for a 26-16 lead. The Blue Dragons didn’t have a field goal for the final 3:24 and NEO didn’t score from the field in the final 2:57, but the Dragons were 10 of 12 from the free-throw line and NEO was 8 of 10 as Hutchinson led 38-33 at halftime.

After the decisive Hutchinson third quarter, Hutchinson led 69-54 with 7:38 to play in the fourth quarter. The Dragons sealed the win with a 9-0 run. Howard converted a three-point play to give the Dragons a game-high 24-point lead at 78-54 with 4:48 remaining in the game.

GAME NOTES – The Blue Dragons are now 7-1 all-time vs. NEO, including five in a row. … Mya Williams became the 35th Blue Dragon in program history to reach the 700 career-point mark with 711 points. She also moved into 13th place on the career made 3-point list with 92 career treys. … Hutchinson held an opponent to less than 40 percent shooting for the third-straight game.