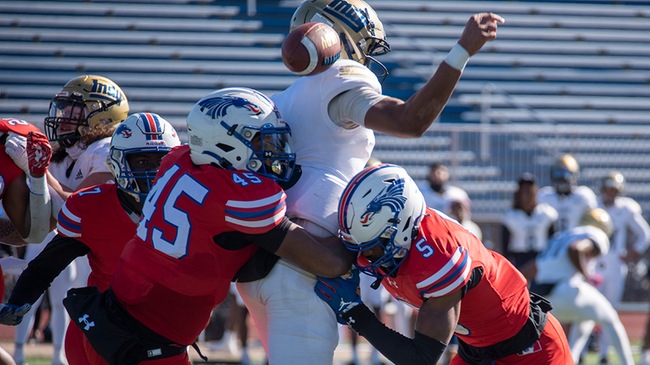 Rodney Green Jr's (45) sack/fumble on the sixth play of the game was returned for a touchdown on the sixth-play of the game as No. 1 Hutchinson rolls to a 53-0 victory over Independence on Saturday at Gowans Stadium. (Andrew Carpenter/Blue Dragon Sports Information)

HUTCHINSON, Kan. – Rodney Green Jr. and Ja’Mez Drummer set the tone for the Hutchinson Community College Football team on the sixth play of the game on Saturday at Gowans Stadium.

Green’s sack/fumble of Independence quarterback Greg Jones and Drummer’s 25-yard scoop and score was just the first of many big plays for the Blue Dragon defense as Jayhawk Conference and No. 1-ranked Hutchinson completes an undefeated league season with a 53-0 victory over Independence.

Hutchinson improves to 9-0 overall and is completes the Jayhawk Conference season 6-0. The Blue Dragons complete the regular season next Saturday in Council Bluffs, Iowa, against Iowa Western.

The Dragons extend their current winning streak to 15 games, which is now the second-longest win streak in program history.

The Blue Dragon defense posted its second shutout of the season, holding Independence 260 yards under its season total yardage average with 63 total yards. The Pirates passed for just 41 yards and only 22 rushing yards. Independence had just four first downs in the game.

The Dragon defense racked up three takeaways. Drummer, in addition to his fumble recovery for a touchdown, also had an interception. Green and Walter Bob Jr. had forced fumbles that were recovered by Drummer and Stephen Matina.

Hutchinson’s defense also recorded its first safety of the season when Nikko Taylor had a quarterback hurry on a Jones’ pass from the end zone, which was deemed intentional grounding. Taylor’s safety gave the Dragons a 29-0 lead with 10:22 to play in the second quarter.

After the defense gave the Dragons a 7-0 lead, Dylan Laible and Malik Benson teamed up for a pair of touchdowns, passes from 9 and 4 yards for a 21-0 lead with 4:42 to play in the first quarter.

After Taylor’s safety, the Blue Dragons took a 36-0 lead into the locker room when Dylan Kedzior capped an 11-play, 62-yard drive with a 2-yard touchdown with 3:26 to play in the second quarter.

Hutchinson tacked on 10 points in the third quarter after a Tre Bess 42-yard touchdown run and a Segraves’ 39-yard field goal. Ed Williams scored the final points of the game, a 7-yard touchdown with 7:40 to play in the fourth quarter for a 53-0 lead.

Offensively, the Blue Dragons racked up 399 total yards with 245 rushing yards and 154 passing yards. The Dragons had 24 first downs.

Kedzior had a game-high 85 yards on 15 attempts with a touchdown. Bess rushed for 64 yards on eight carries. Williams rushed 11 times for 60 yards.

Laible completed 9 of 17 passes for 150 yards and two touchdowns.

Segraves was 7 of 7 on extra points and 3 of 3 on field goals. Segraves is now 12 of 17 on field-goal attempts this season and is now tied with Michael Mesh for second in Blue Dragon single-season history for made field goals.

GAME NOTES – The Blue Dragons are now 14-1 at Gowans Stadium under head coach Drew Dallas. … The Blue Dragons are now 58-24-5 all-time against Independence, 34-10-2 in home games. … The Blue Dragons have outscored Independence 95-0 in the last two games played. … This was the 10th shutout vs. Independence in series history. … Laible increases his career records to 5,419 passing yards and 61 touchdown passes. … Benson increases his career receiving yards’ record to 1,963 yards. Benson also moved passed DeQuan Bowman into fourth place on the career receptions list with 86. … The was the fourth-straight game and the sixth overall this season the Dragon have held an opponent to less than 100 yards rushing.