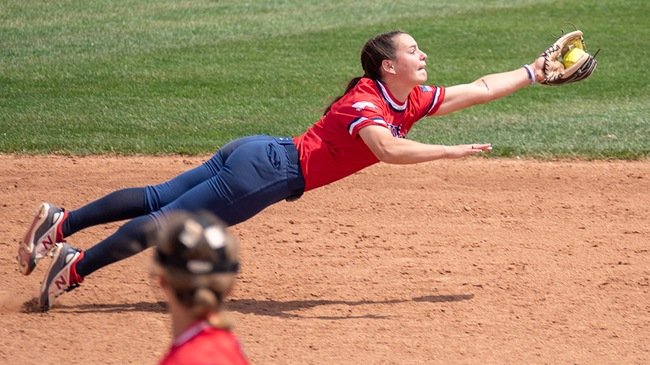 Blue Dragon shortstop Madison Grimes dives to make a catch of a Garden City line drive in Game 1 of a No. 20 Hutchinson sweep of the Broncbusters on Saturday at Fun Valley. (Andrew Carpenter/Blue Dragon Sports Information)

The No. 20-ranked Hutchinson Community College softball team closed out the most successful home season in program history on Saturday with a Jayhawk Conference doubleheader sweep of Garden City at Fun Valley.

had three hits each and Stipsits drove in a career-high four runs to lead the Blue Dragons to a 10-2 run-rule victory in six innings in the opener on Saturday. Pitchers

combined for Hutchinson’s eighth shutout of the season and Wertz broke the career record for saves as Hutchinson defeated Garden City 2-0.

The Blue Dragons have won eight games in a row.

Wertz’s save in Game 2 was her seventh of the season. The save extended her Blue Dragon single-season record for saves and she now has sole possession of the Blue Dragon career saves record, breaking the tie with Holly Kelley.

This is Wertz’s third Blue Dragon record this season. In addition to now holding the season and career saves record, Wertz also has the single-game record for strikeouts, fanning 18 batters on March 19 at Garden City. Now with 132 strikeouts for the season, Wertz moves into the single-season Top 10 at No. 10
Also on Saturday, All-American


GAME 1 RECAP
The Blue Dragons scored at least one run in each of their six offensive innings in the first game against Garden City.

Stipsits was 3 for 4 with a career-high four RBIs to lead the Blue Dragons in Game 1. Stipsits had an RBI groundout in the second and added an RBI single in the third to give the Dragons a 4-0 lead. The Blue Dragon freshman catcher doubled and scored in the fifth and then closed out the game via the run- rule in the sixth with a two-run double to right-center field.

Sterneker was 3 for 3 with a walk with a double, three runs and two RBIs.

Grimes also went 2 for 4 with a pair of RBIs. Grimes hit her fourth home run of the season in the first inning. Grimes also had two huge defensive plays in Game 1. Grimes threw out the tying run in second inning and made a great diving catch to end the sixth inning.

extended the Blue Dragons’ fourth-longest hitting streak to 17 games with a fourth-inning single.

improved to 7-0 in the pitching circle with a complete-game performance. Munson gave up six hits and two runs with no strikeouts and one walk. Munson gave up a two-run home run in the top of the fourth to Garden City’s Alexis Maestretti.


GAME 2 RECAP
The Blue Dragons leaned on pitchers Loney and Wertz to complete the sweep.

Loney improved to 7-4 for the season with five-plus innings of shutout softball. She allowed four hits and struck out two in earning her 17th career victory, which ties her for ninth on the career wins’ list with Kelli Walker (2008-09).

Loney gave up a leadoff single to Garden City’s Tara Reid to start the season. Wertz entered the game at that point and struck out all six batters she faced for her seventh save of the season. In 11 innings against Garden City this season, Wertz has 28 strikeouts.

The only offense for the Blue Dragons save in back-to-back at-bats to start the second inning.

led off the inning with a groundball single up the middle. Sterneker then hit a 1-2 pitch from Garden City starter Lacey Kearsley over the left-field wall for a 2-0 Blue Dragon lead.

After the home run to Sterneker, Kearsley retired the next 15 Blue Dragon batters she faced. Kearsley had two strikeouts.

Dougherty went 0 for 3 in Game 2, ending her hitting streak at 17 games.