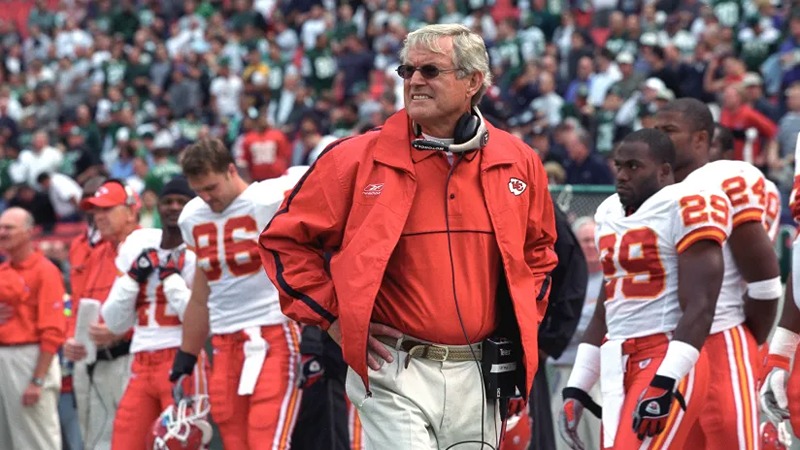 Kansas City, Mo. (Chiefs.com) – Whatever one might say about Dick Vermeil’s postseason success in Kansas City, the reality is that previous Chiefs’ head coaches did not achieve what he accomplished in five years in terms of public support and general good feeling.

His success as head coach of the Chiefs was shaped as much by character and personality as it was by coaching genius, and he left town with people feeling positive about what he had done here.

He becomes the third head coach in Chiefs’ history to be inducted into the Pro Football Hall of Fame this month, joining Marv Levy and Hank Stram.

“Vermeil is a good man,” wrote the Wichita Eagle, at the time of his departure from Kansas City. “His players love him. Everyone in the Chiefs organization loves him. There are a lot of reasons for that, not the least of which being that he’ll treat the water boy, or whomever, the same as he’ll treat [General Manager Carl] Peterson or [Chiefs Founder] Lamar Hunt.”

He was a “classy man with a lot of love in his heart,” admitted the Topeka Capital Journal. “The moist eyes are a sign of passion and compassion for the sport,” wrote another reporter. “The career retrospectives are sure to include as much about the detail-oriented man who wears his emotions on his sleeve as the accomplishments on his NFL coaching resume,” offered one of the many out-of-town reporters who came to know the Chiefs through Vermeil.

His offenses created a buzz around the league, their play seldom seen in the NFL, which was a direct contrast to the previous years of defensive-minded football under Marty Schottenheimer and Gunther Cunningham.

To the public, he perpetrated many coaching values as he ministered to a community of fans who overwhelmingly embraced him.

All who came to know him came to understand that the key to the head coach’s mind was his heart. Dick Vermeil spoke from the heart, and it served him well more than any NFL head coach in recent memory.

But “speaking from the heart” didn’t mean babbling on or trying to exploit cheap sentiment. It meant having a sound, organized basis — a foundation of core beliefs — to share and articulate. Sometimes, it even meant turning a question upside down. For example, instead of bristling, he would often give a situation a positive spin into an affirmative answer as he frequently did when talking about a backup player’s improvement in the face of a starter’s nagging injury.

What many public figures have and could not do without, and what too many head coaches have in arguably great abundance, is the desire for respect and for admiration. Vermeil did not have these desires.

Even if he paid little mind to the impact of public opinion, the team and the entire Chiefs organization benefited by having a coach who could withstand the limelight and, indeed, shine within it. If his Chiefs teams fell short on the playing field, he seldom faltered off of it, causing people to better appreciate his accomplishments than might be warranted.

Dick Vermeil was the central figure in the Chiefs’ story from 2001 to 2005. A man of restless ambition whose love of leadership kept bringing him back to coaching, he was not shy about sharing his dreams, his hopes, his accomplishments and his disappointments with anyone who would listen.

All he ever wanted his staff and his players to do was to stand back and let him present his case. Behind his drive was an understanding of people and, as he said so often, how much they want to know you care, not care how much you know.