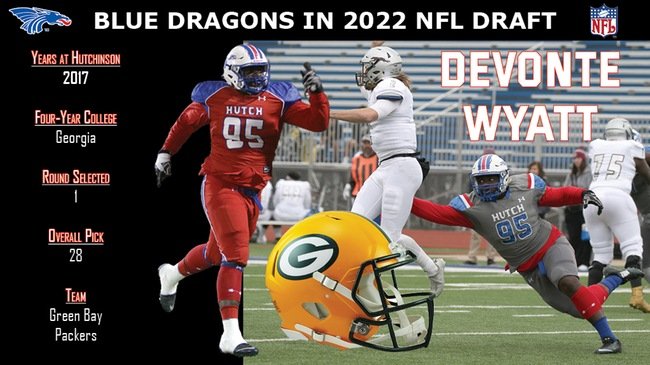 Wyatt, a 6-foot-3, 315-pound defensive tackle from Decatur, Georgia, surpassed Cordarrelle Patterson as the highest-ranked Blue Dragon in NFL Draft history. Patterson was taken with the 29th overall pick by the Minnesota Vikings in the 2013 NFL Draft.

Combining drafted players and undrafted free-agent signees, Wyatt is the 35th Blue Dragon to be selected by an NFL team.

Wyatt joins Kevin Barry and Angelo Pease as Blue Dragons who were selected by the Packers. Both Barry (2002) and Pease (2013) were undrafted free-agent signees.

Wyatt played one season for the Blue Dragons in 2017, playing in 11 games. Wyatt finished with 30 total tackles, including 4.5 tackles for loss and 3.0 quarterback sacks. He also had four quarterback hurries with one pass broken up and one blocked kick.

Wyatt then transferred to the University of Georgia where he played 49 games over four seasons. Wyatt finished with 113 career tackles, including a career-high 39 in Georgia’s 2021 national championship season.

Wyatt was one of five Georgia defensive players taken in Thursday’s first round.