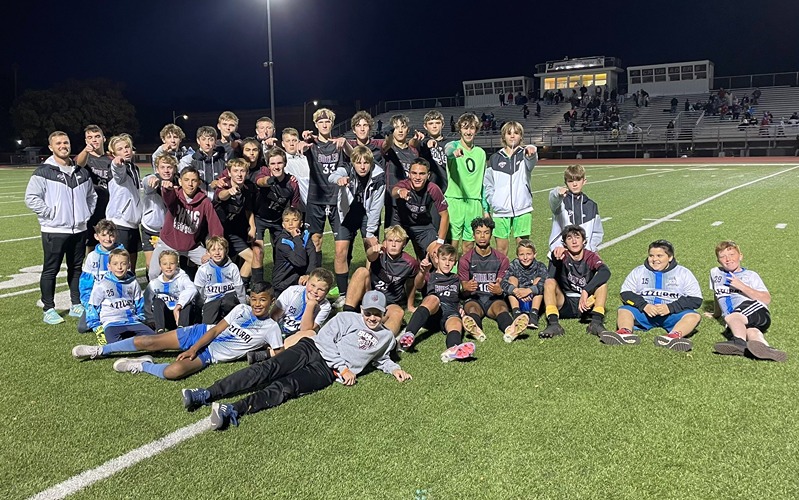 BUHLER, Kan. – While the Buhler boys’ soccer season ended just short of a return trip to the State semifinals, it will certainly be remembered as one for the record books.

McPherson upset Buhler last Tuesday, 1-0, in the quarterfinals at Crusader Stadium. The game’s lone goal came late in the first half on a shot up the middle by Mac’s Hayden Hoxie. It was Buhler’s only shutout loss this season.

“It just wasn’t our night, we played a very organized McPherson team,” head coach Bransyn Felty said. “It’s not the way we wanted it to end, but it’s nothing to hang our heads on.”

“This season will be one that people will remember for a while,” Felty said. “They earned every single thing that they accomplished this year.”

The AVCTL released its All-League Honors for Divisions III and IV on Monday. Eight Crusaders made that list.

To top it off, Felty was named Coach of the Year. A nice wedding gift for the former Crusader standout who also happened to tie the knot over the weekend.

Six Buhler seniors played their final 80 minutes of high school soccer in last Tuesday’s quarterfinal loss. Four of them, Frederick, Kretzer, Darling and Stambaugh, were among those to receive All-league Honors. The other two, Elijah Bruch and Isaac Spicer, were also key contributors to the Crusaders’ historic season.

“The boys were committed to our goal and each other all year long,” Felty said. “My senior class will be greatly missed.”

There is plenty to be excited about for the future, with a solid nucleus of talent returning for next season, and a lot of young players awaiting their turn to put on a Buhler uniform.