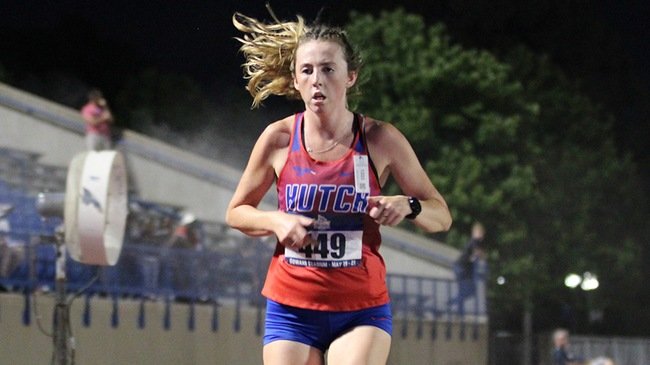 Violet Martinez
both earned All-America honors for the third time each on Thursday on opening day of the 2022 NJCAA Division I Outdoor Track and Field Championships at Gowans Stadium.

Cocking placed fifth in the 10,000 meters late Thursday night and obliterated the Hutchinson women’s school record in the event. Martinez became the second Blue Dragon in team history to be a national runner-up in the pole vault, tying for second place on Thursday.

Overall, the sophomore duo accounted for all 11 points scored by Hutchinson on Day 1. The Blue Dragons are tied for seventh after competition on Thursday.

Running the 10,000 meters for the first time in her career on Thursday, one of the best distance runners in Blue Dragon history, Cocking stayed in the lead pack for most of the 25 laps around Gowans Stadium and finished fifth, bettering the Blue Dragon school record in the women’s 10,000 meters by 2 minutes, 1.11 seconds.

Martinez cleared 10 feet, 4.5 inches on Thursday, tying Cloud County’s Maggie Armstrong for second place in the pole vault. Martinez and Armstrong matched performances by clearing 10-4.5 on their first attempts, but missing at the next height.

Martinez matches the best Blue Dragon finish in the pole vault in team history. Page Stuhlsatz was the national runner-up in 2012.

The Blue Dragons had two other entries on Thursday.

Hutchinson’s 4×800-meter relay team finished 11th in the event final on Thursday. The relay team of

Hannah Schrock
finished 14th in the women’s hammer throw on Thursday with a mark of 129 feet, 1 inch. Schrock will also compete in the discus on Saturday.

The Blue Dragon women have a quiet Friday with only one entry competing. Sophomore Noel Buckhaults runs in the 3,000-meter Steeplechase final at 4:30 p.m. at Gowans Stadium.