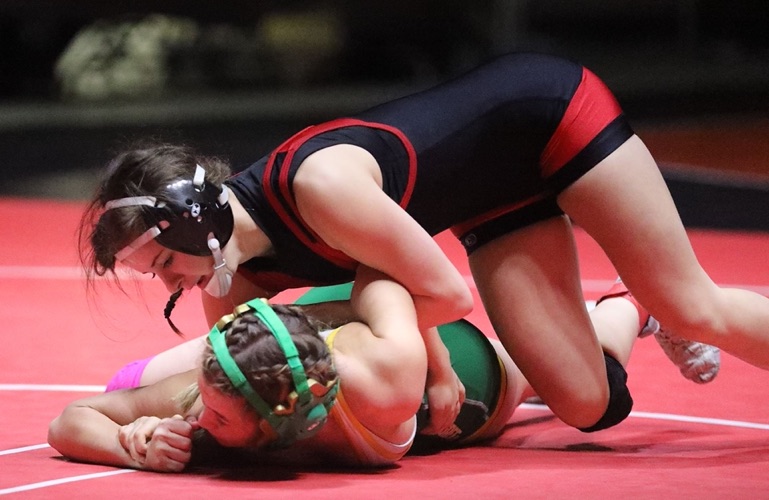 TOPEKA – Damon Parker was already in a good mood when he woke up Monday morning, albeit from a shortened night of sleep.

Returning to Topeka at about 2:30 a.m. from Colorado where he had taken a large contingent of wrestlers from his girls’ program at Washburn Rural to attend and compete at the Rocky Mountain Wrestling Camp, Parker and his crew were still relishing in their success in Gunnison, Colo. Split into two teams for the camp, Washburn Rural finished 1-2 in the team competition, going against programs from Kansas, Colorado, Utah and Arizona — a best for the Junior Blues.

But the high from the weekend got some icing on the cake on Tuesday. That’s when Parker and his fellow wrestling coaches across the state got some much-welcomed and highly anticipated news from the Kansas State High School Activities Association.

“It’s incredible man,” Parker said. “It seems like every year, we keep taking steps in the right direction to bring about the necessary equality for this sport. To get to 14 like the boys, that just gives that many more girls the opportunity to wrestle at the varsity level, which is what we want, the same opportunity for the girls as we have for the guys. You extrapolate that out across the state, that’s hundreds more girls that get to wrestle at the varsity level and that’s a great thing.”

Parker was far from alone in sharing that sentiment.

“I’ve always had a philosophy in building my program that if the boys had it, I wanted the girls to have it,” Baldwin coach Kit Harris said. “The more we take that approach, it’s the right way to grow the sport.”

For both Parker and Harris, the changes will be huge for their programs, which rank among the largest girls’ programs in the state. With only 12 weight classes in the three years girls wrestling has been a KSHSAA-sanctioned sport, both often had state-caliber wrestlers simply blocked by other state-caliber wrestlers on cracking the varsity lineup.

While that still could obviously occur, the addition of two weight classes allows the chance for more quality wrestlers to contend for state titles.

“It’s been a double-edged sword having a big, strong program,” Parker said. “Every year, we’ve had seniors who’ve found themselves as the second person on the depth chart, girls who were really good. Now this is another opportunity for them to get a chance to shine.”

“We have backups that are very competitive and placing in tournaments,” Lowe said. “Now, we can spread them out a little bit more. It just gives more athletes opportunities, adding those two more weight classes.”

There are also health benefits to be had. Harris said he’s had wrestlers who have either had to lose a significant amount of weight or wrestle up a weight class or two to find their way into the lineup. With more weights, those occurrences should diminish.

“We had a lot of tough girls last year in that 120-130 range and one had to really cut down to find a spot and the other was out of a spot,” Harris said. “You want kids to be healthy, maintain a healthy weight, maintain strength and wrestle as close to their natural body weight as possible. That’s the best approach for everybody and the more weights you have, it helps everyone involved.”

Parker said the changes can also help maintain the growth of the sport across, which already has been exploding at a high rate.

“It maybe puts a little more pressure on coaches to fill their rosters,” Parker said. “You’re kind of going into a gun fight with a water pistol if you go into a dual or tournament with just eight girls and other teams have a full lineup.”

“The more opportunity you provide, the more it grows the sport,” Harris said. “And the numbers are coming. Every tournament you go to in the past two years, the amount of girls and girls tournaments have just sky-rocketed. Rosters are going to fill, youth programs are going to fill and schools keep adding programs across the state.”

“The minute that I posted the (new classes) on our Facebook site, I had four or five girls say, hey, I’m going to go to this weight class now, or that weight class now,” Lowe said. “It’s just exciting for them. Changes like this promotes the sport and excites the girls. Now they’re already starting the plan for next year. It’s just an exciting time for the sport and for girls athletics.”

“I kind of like them,” said Goddard coach Brett Means, citing data that showed that 65% of male wrestlers certify at 135 pounds and above. “We need more in-the-middle type of weight classes. When the changes were made last time, they took one away from us, which hurt us.”

The new weight-class breakdown also falls in line with those adopted by surrounding states Missouri, Oklahoma, Nebraska and Iowa with Colorado also perhaps following the same format. With so much inter-state competition held in wrestling the uniformity will be beneficial to those travel out-of-state and those coming to Kansas for tournaments.

“I bet every team out there competes in at least one tournament that’s multi-state,” Harris said. “Most do several. This is going to help long-term because in the past, there’s been complications.”

“We travel a lot and we’re all over the planet,” Means said. “I think all these neighboring states and every state in the union should have uniform weight classes.”

Enough is Enough: Bad Behavior by Coaches, Parents and Fans Must Stop

Buhler Blanks Winfield, Gets First Victory of the Season