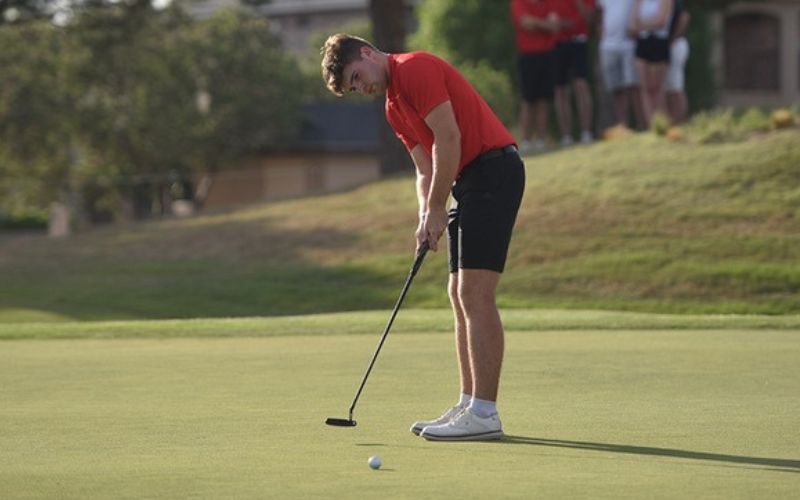 Both Clemons and the Blue Dragons find themselves in second place after two rounds of the Farmers Insurance Samuel Proal Classic at Walking Stick Golf Course.

The final round of the 54-hole tournament will be Tuesday morning.

The Blue Dragons posted an opening-round of 283 on Monday morning led by Clemons’ 4-under 68 and freshman Louis Ross‘ 2-under 70. The Dragons gave a couple of strokes back late in the afternoon round and finished at 3-under 285. Once again Clemons led the way with a 68.

Hutchinson is at 8-under 568 through two rounds. The Blue Dragons trail tournament host CSU-Pueblo, which blitzed its home course with a 31-under 545 after rounds of 272 and 273 on Monday. Colorado Mesa is third at 581 and Fort Lewis College is fourth at 583. Dodge City is sixth at 588.

Clemons started his day off with seven straight pars. He then had an eagle, four birdies and one bogey in his opening-round 68. Clemons had seven birdies and three bogeys in his second round on Monday.

Ross, who started his Blue Dragon career with back-to-back birdies, is tied for 11th with two other golfers at 1-under 143. Ross opened with a 70 and finished Monday with a 73.

Sophomore Blake Saffell had an eagle in his opening-round 72. Saffell finished with a 73 and is tied for 19th at 1-over 145.

Freshman Louis Galvin is tied for 33rd at 150. Galvin opened with a 79, but had an eagle, four birdies and two double bogeys in an afternoon round 71.

Sophomore Addison Alonzo, who is playing as an individual, had a tough start on Monday with an opening-round 80. Alonzo made a 10-stroke improvement in the afternoon round with a 70. He is tied for 33rd at 150.