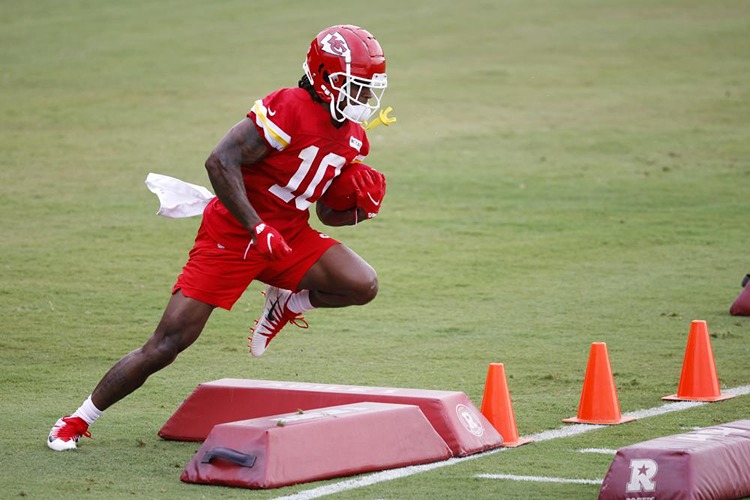 FILE - Kansas City Chiefs rookie running back Isiah Pacheco goes through a running drill during a morning workout at the team's NFL football training camp facility in St. Joseph, Mo., Sunday, July 24, 2022. Edwards-Helaire and Isiah Pacheco were drafted on opposite ends of the spectrum, one a first-round pick with high expectations and the other seventh-round selection chosen almost as an afterthought. Yet a third of the way through training camp, the two are in a heated race to be the starting running back of the Kansas City Chief. (AP Photo/Colin E. Braley, File)

ST. JOSEPH, Mo. (AP) — Clyde Edwards-Helaire and Isiah Pacheco were chosen by the Kansas City Chiefs on opposite ends of the draft spectrum, one of them a first-round pick with the accompanying expectations and the other a seventh-round longshot.

Midway through training camp, they might as well have been picked one after the other.

That’s because Edwards-Helaire, the incumbent-if-injury prone starter, and Pacheco, the unheralded rookie, have swapped first-team reps on a near-daily basis.

And while veterans Jerick McKinnon and Ronald Jones II are fighting for roster spots of their own, the competition between Edwards-Helaire and Pacheco has become must-watch stuff for fans at camp.

“I’m curious to see those guys compete in games,” Chiefs coach Andy Reid admitted. “We know a couple of (the running backs) because they’ve been here and we’re learning about the others. But it looks like a good group.”

The first chance to see them in games comes Saturday, when the Chiefs visit Chicago for their preseason opener.

Edwards-Helaire, the 32nd overall pick in the 2020 draft, is the known quantity in Kansas City, where he has started 23 games over his first two seasons. He’s averaged nearly 4 1/2 yards per carry, caught 55 passes and has proven that despite his small, 5-foot-8 stature that he can protect Patrick Mahomes from would-be blitzers.

His biggest problem, though, has been that he’s only played 23 regular-season games, thanks to a litany of injuries that put him on the sideline nearly as much as on the field. And along with missing seven games last season, Edwards-Helaire also missed the Chiefs’ wild-card game before serving as a backup to McKinnon in the divisional round and AFC title game.

“Clyde has done a heck of a job — a heck of a job — staying healthy this entire offseason,” said Chiefs offensive coordinator Eric Bieniemy, who spent nine seasons playing running back in the NFL. “At the end of the day we’ve just got to make sure that we’re emphasizing putting him in position to have an opportunity to make plays.”

What could give Edwards-Helaire an advantage in the race for the No. 1 job? His ability to catch the ball out of the backfield — “I am a thousand-and-ten percent confident in my hands,” he said — and his experience in Reid’s offense.

The playbook is thick. The terminology is complicated. The entire system takes time to learn.

Pacheco seems to be picking it up in a hurry.

He was the 251st overall pick in April’s draft, which means only 10 players were selected after him, and his resume at Rutgers hardly made him a hot prospect. Pacheco only averaged 3.9 yards per carry last season, when he finished with 647 yards rushing for a 5-8 team, and he had a relatively modest 2,442 yards rushing in his four-year career.

Those numbers can be misleading, though. Pacheco was on a rapid rise before the pandemic caused chaos with his junior season, and the offensive line blocking for him the past few years wasn’t exactly the best in the Big Ten.

It was at the NFL scouting combine that Pacheco jumped onto the radar of scouts. He ran the 40-yard dash in 4.3 seconds, the best among running backs, and backed up that sizzling speed with good numbers in just about everything else.

Based on raw athleticism, many teams no doubt would have made Pacheco a priority among undrafted free agents had the Chiefs not spent a seventh-round pick on him.

But it was clear their gamble could pay off big as early as voluntary summer workouts, when Pacheco began turning heads in Kansas City every time he stepped on the field.

Chiefs Do About-Face After Colts Letdown in Blowout of Bucs