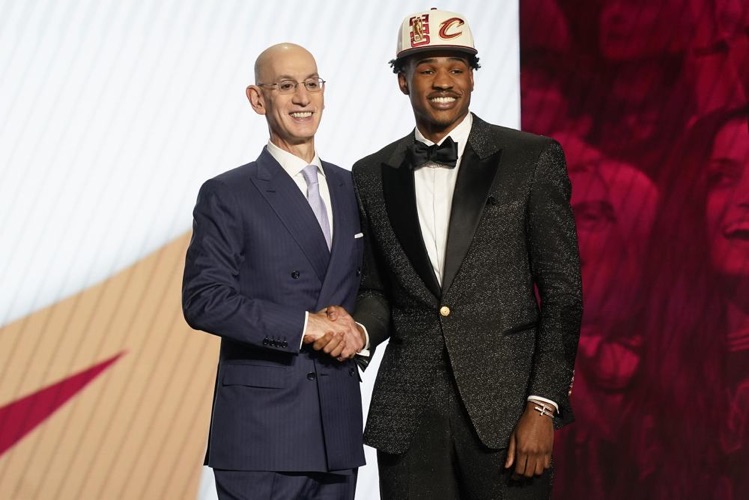 CLEVELAND (AP) — Ochai Agbaji developed championship DNA in college. The Cavaliers are counting on it staying with him in the pros.

Looking to add a perimeter player who can shoot, defend and maybe accelerate their timeline to NBA title contention, Cleveland selected Agbaji with the No. 14 overall pick in the draft Thursday night.

Later, the Cavs used the No. 49 pick — acquired in a trade earlier in the day from Sacramento — to select Isaiah Mobley, the older brother of forward Evan Mobley, whose arrival in Cleveland last season triggered the team’s turnaround.

The Mobleys played one season together at USC and will now have the chance to do it again with the Cavs.

With other options available in the first round, including Ohio State’s Malaki Branham and Duke’s AJ Griffin, the Cavs locked in on the 6-foot-5 Agbaji, who as a senior led Kansas to the NCAA title last season. Agbaji was named the most outstanding player at the Final Four, and his performance in the spotlight helped separate him from other players.

The Cavs are ready to win. Agbaji knows how.

“It’s a part of his makeup and he’s coming in to a team that wants to win and he’s going to bring some unique ingredients to that,” said Koby Altman, Cleveland’s president of basketball operations. “You’re seeing national champions kind of sprinkled in these conference finals most recently and they definitely bring a chip with them. We hope he brings that to us.”

The 22-year-old Agbaji averaged 18.8 points, 5.1 rebounds and made 41% of his 3-pointers for the Jayhawks, and his ability as a defender was another factor in the Cavs’ decision to bring him aboard.

He’ll join one of the league’s most intriguing young rosters in Cleveland, and a team with playoff aspirations following a turnaround, 44-win season.

The Cavs entered the offseason desperate to add another quality shooter and believe they’ve found one.

“He can really shoot,” Altman said. “He’s got a really quick trigger. You can run him off screens. The shooting piece was important. “The fact he can play wing, the fact he can guard wing is great. I don’t know if that went into it so much as the need for shooting. I don’t want to put him on a pedestal and say, ‘This is the next great wing that we draft.’ But maybe it is.

“I do know that he fits a need right away and he’s going to compete and he has that winning pedigree that we really like.”

The Cavs entered the draft with four picks. Cleveland, which already had the Nos. 39 and 56 picks, added No. 49 from the Kings in exchange for the draft rights to Sasha Vezenkov and $1.75 million.

At No. 39, the Cavs selected center Khalifa Diop, a 7-footer from Senegal. He’s expected to stay overseas and develop before trying to crack Cleveland’s roster.

After picking in the top five in each of the past three drafts, the Cavs weren’t under as much pressure to land a potential All-Star or even an immediate-impact player this year. They could be more selective.

Cleveland was diligent during the pre-draft process. There were several players who fit their needs, but Agbaji stood out due to his offensive skill set, a 6-foot-10 wing span and because he’s coming from one of college basketball’s premiere programs.

“He just fit the character and the attitude and the work ethic that we’ve been looking for,” Altman said. “This is the first time we’ve drafted a national champion right out of the gate. He brings a lot of accolades, but he brings a humbleness that we appreciate.”

Kansas coach Bill Self said the Cavs are getting a player who still has room to grow his game.

“His intangibles have improved so much with competitiveness, even though he always was,” Self said on a Zoom call from New York. “He’s learned there’s a gear you got to get to to compete at the highest level. When you work as hard as he does in that fifth gear every single possession, every single drill, every single shot, you’re going to get better.”

A 22-win jump last season has vaulted the Cavs back into contending status. They’ve got one of the league’s most promising young cores, highlighted by All-Star guard Darius Garland and Mobley, last year’s No. 3 overall pick who had a strong rookie year.

Cleveland was in position to make the playoffs last season for the first time since 2018. However, the Cavs, who were overrun by injuries throughout the year, collapsed down the stretch, losing eight of their last 11 and then to Brooklyn and Atlanta in the play-in format.