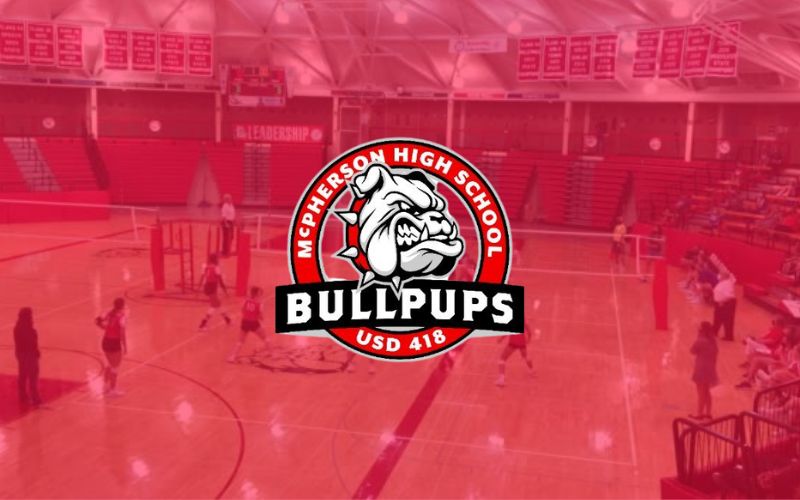 MULVANE, Kan. – The Bullpup Volleyball team traveled to Mulvane for a triangular Tuesday, as they held on to defeat the Mulvane Wildcats, before earning a split in three sets against the Augusta Orioles.

Early in Set 1 against Mulvane, errors hurt McPherson, as they would have to rally, and come from behind to win 26-24. In Set 2, the Pups found themselves leading 24-21, before the Wildcats crept within a point, forcing Bullpup Head Coach Christy Doile to call a timeout to regroup her team for the final point. Following the timeout, Brooke Doile’s serve would hit off the top of the net, and landed on Mulvane’s side, for an ace to end the game. She led with 6 aces on the night.

In the Pups’ final match of the evening, they would exchange sets with Augusta, as the Orioles would take Set 1, 25-17. Coach Doile said, “Their outside hitters were both converting for kills, and were the difference in the set.” The Pups would bounce back, winning big in Set 2, 25-13, but in Set 3, MHS would dig themselves a large hole, and had a great comeback, but the rally came just late, as the Pups would fall 25-19.

Sophomore Haley Hagemann had a season-high 30 kills, and 19 digs on the night. Coach Doile was impressed with her performance, and mentioned that Hagemann had 22 total kills in 5 matches of the home invitational a few weeks ago. Alex Romero had 49 assists and was given a chance to serve, where she had 3 aces and no errors. Romero and Kelcy Bergstrom both had two blocks, as Bergstrom stepped in to play the middle-hitter in the final two sets against Augusta where she had 4 kills without an error. Coach Doile said, “She was a positive spark to our offense.”

The Varsity is 5-9 overall, while the Bullpup JV moved to 7-5 on the season after defeating August in the opener 25-23, and 26-24, before falling in three sets to Mulvane. Coach Kayla Singleton said, “After a long tournament weekend of playing I was hopeful we would be able to bounce back and be able to get a couple of wins under our belt in preparation for this weekend. We battled pretty hard with Mulvane but just couldn’t seem to seal the deal.

Singleton concluded by saying, “I am hopeful that this will help them to self-reflect on what their leadership roles look like and how they can positively contribute to situations when things get tough. They are a great combination of athletes to compile a team so I know they can perform at a higher level. Hopefully getting a couple of good days to work out some kinks this week will give us full prep for a big weekend in Great Bend.”

Below are notable stats from the varsity and JV triangular: