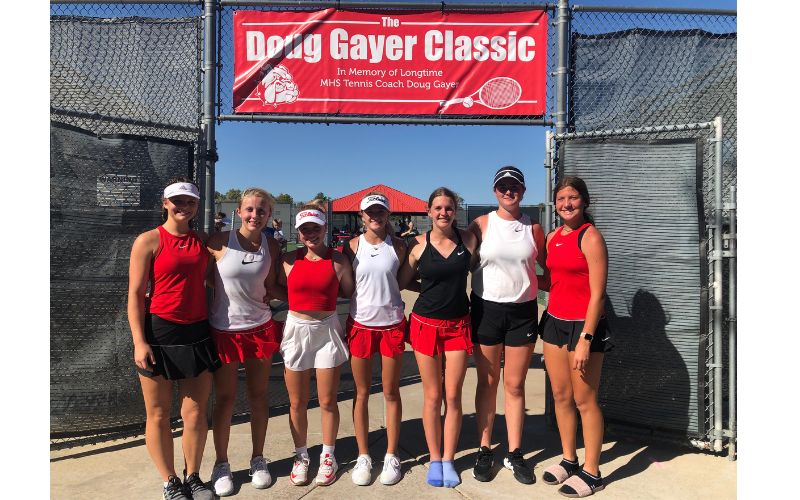 The Classic is always a special tournament for those who knew Doug Gayer, as Head Coach Tyler Brown reflected by saying, “I’m extremely proud of our team for winning The Doug Gayer Classic.” Doug was one of the great ones. This tournament always brings back so many great memories I had with Coach Gayer and doing what we loved to do for the game of tennis. That is what I hope I can pass along to my team.”

Tuesday, his team was able to claim first place in the Doug Gayer Classic, as all six girls were able to reach the semifinals. Riggs and Brodie Kuhn went undefeated in their four matches on the day, facing teammates Paige Stucky and Taiya Young in the final four, before defeating Hutch 8-6 in the finals. Stucky and Young would win their third-place match, as the duo went 3-1 on the day. Kyndall and Maren Sandbo would play singles for the Pups, where they both fell in the semifinals, forcing a head-to-head matchup for third place, where Kyndall edged her younger sister Maryn, 8-6.

Following the match, Brown mentioned that he and his team got back to the basics over the last few practices, and focused more on having fun, rather than solely emphasizing, and stressing, winning. “Tomorrow is not guaranteed.” said Brown, who later added, “The teammate that drives you nuts at times, is also who you go fight for.” He said, “Live in the moment, enjoy that opportunity, and make it a memory you want to always remember and want to look back on. Hopefully, as each day of our season goes by we can strive to see more of those high character qualities in each other.” Brown concluded by saying, “Hopefully with 6 girls making the semifinals and a team championship we made Coach Gayer proud.”

The Bullpup Girls Tennis team will return to action Saturday, as they’ll travel to play in the highly touted Tournament of Champions, hosted by Wichita Collegiate. Matches are scheduled to begin at 8 a.m.

Below are the team and Bullpup individual results from the Doug Gayer Classic: