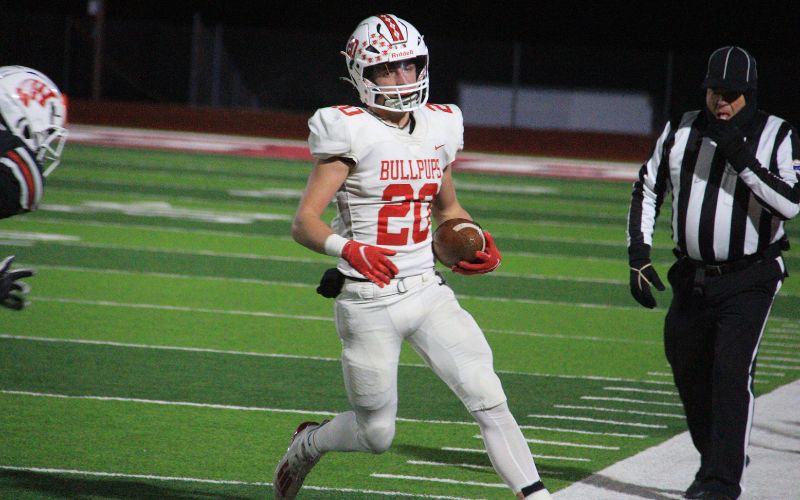 WAMEGO, Kan. – The top two teams in Class 4A West met on Friday, in the Sub-State Round of the High School Football playoffs, as the No. 2, McPherson Bullpups traveled to take on the undefeated No. 1, Wamego Red Raiders, with the winner advancing to their first state title game in program history.

After the Bullpup defense forced a three-and-out, the first two offensive plays went for over 20 yards, as Dawson Gottwald, and Hunter Alvord would have some of their biggest runs immediately to start the game, but McPherson was unable to get any points out of their opening possession.

Wamego would get on the board first on their following possession, as Hayden Oviatt broke free for a 58-yard touchdown. Later the Red Raiders would add two field goals, keeping the Bullpup offense quiet most of the half, as Wamego had come in allowing just one opponent to score two touchdowns all season.

The Pups found themselves down two possessions 13-0, with 3:13 in the second quarter before Alvord would inch the Pups closer with a 20-yard touchdown run, which was set up by a big reception by Jaytin Gumm out of the backfield.

With under a minute in the half, Wamego would look to add to their lead, but a pass over the middle was bokeh up by Jaret Myers, and landed in the hands of Jayce Schriner for the interception, as the Pups looked to potentially take the lead before the half.

After a pass interference call on Wamego, Blaise Hoover would be brought in for a field goal to cut the McPherson deficit to 13-9 at the half.

The Pups would receive the third-quarter kickoff and would put together their most efficient drive of the game, keeping the Red Raiders guessing, mixing the run and the pass before Jaytin Gumm would give the Pups their first lead of the game 16-13.

However, Wamego would answer with a steady dose of Hayden Oviatt, who moved from tailback to quarterback at different times, exhausting the Bullpup defense, and never looked back from a 20-16 lead.

After the offensive drive stalled, the Pups were able to get a big stop on 3rd down, as Teegan Haines made his way into the backfield for a sack, forcing 4th down and 14. However, Wamego would elect to go for it on McPherson’s side of midfield and would convert, deflating the Pups as Oviatt, and the Red Raiders would punch it in on their next play to go ahead 26-16.

Time would run out on the Pups and their season, and following a late Wamego score, the Pups would fall 33-16.

“It’s a tough time.” said Head Coach Jace Pavlovich, as he reflected on the season saying, “This is final, a lot of guys won’t get to play this game again.” He said, “I just really love these kids and everything they’ve done, not just seniors, all these kids.” He concluded by saying, “It’s tough to find the words right now, but we’ll regroup on Monday, and get together one more time.”

The McPherson Bullpups conclude the season 10-2, and postseason league honors will be revealed in the next few days. Wamego will advance to the Class 4A State Championship Game to take on Bishop Miege next Saturday, at Topeka’s Hummer Sports Park with kickoff set for 1 p.m.