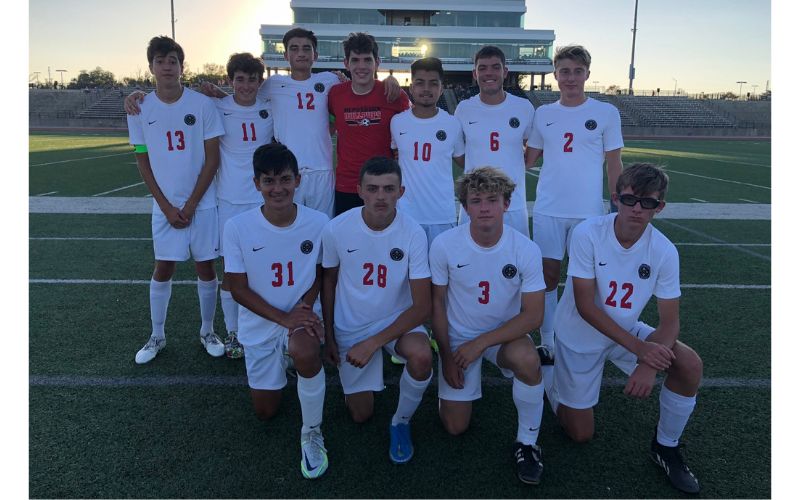 EL DORADO, Kan. – The Bullpup Boys soccer team found themselves clicking on all cylinders at BG Products Veterans Sports Complex, Tuesday evening in El Dorado, as the JV and varsity were both able to defeat the Wildcats by 9 goals.

Head Coach Chris Adrian said, “This was a good confidence booster for the team. A lot of different players scored and got varsity playing time.” He noted the slow start to the first half, but said, “Once the players began switching the ball to the other side of the field or passing it backward, space started opening up.”

Gavin Henry returned from an injury that held him out of the last three games, and he was the first to find the back of the net before Hayden Hoxie would quickly follow, and later scored from a free kick to give the Pups a 3-0 lead. Kayden McVicker would end the half scoring the next three goals, as he’s collected hat-tricks in two of the last three matches. He would give the Pups a 7-0 lead in the second half before Boy Rodriguez, and Manny Morales claimed the final two Bullpup goals as they would go on to win 9-0.

Following the match, Coach Adrian credited his defense, who allowed just one shot, which was a free kick saved by Josh Wehrman. Adrian mentioned this being the first game of the season where everyone on the team was healthy to play, he concluded by saying, “Hopefully we can stay healthy and continue to develop chemistry quickly.”

In the JV match, Felix Thomas Jose scored the 1st goal, then El Dorado would have an own goal that was assisted by Noah Wilgers to give the Pups a 2-0 lead. Wilgers would score the fourth Bullpup goal, after Leland Hept made the score 3-0, with an assist coming from Ervin Jose Fransisco.

The Bullpup Varsity is currently 2-5 overall,  both teams will return to action Thursday, as they’ll travel to Derby. The JV match will begin at 5 p.m; the varsity will follow at 6:30 p.m.