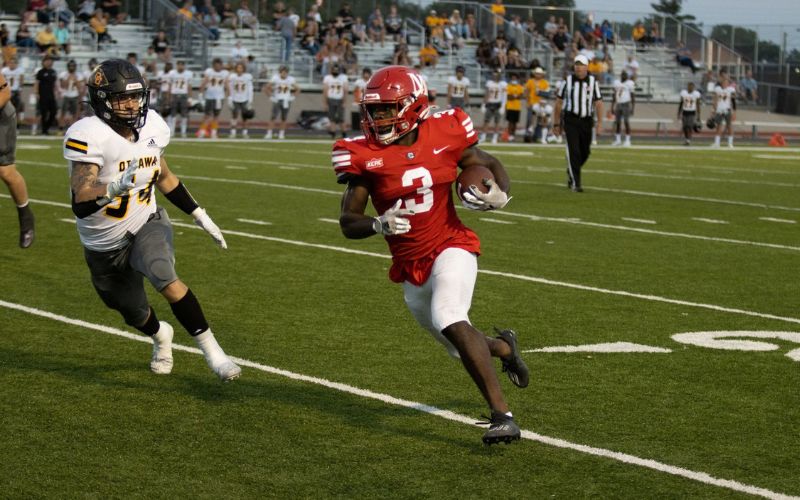 OTTAWA, Kan. (MacBulldogs.com) – McPherson College stumbled out the gate with most of their drives stalling out in six plays or less on Saturday, as they traveled to Ottawa to face the Braves in a KCAC matchup.

The problem of the night for both teams was penalties. Every time either team had some momentum, there would be a penalty that killed the drive. The Bulldog offense wasn’t the only struggling piece in the first quarter; the special team’s unit had their mishaps too, having a punt returned for a touchdown, and a penalty early in the first that cost them 15 yards. The only promise shown in the first was by Jonathan White, who averaged over 10 yards a carry in the first quarter.

Both teams were held quiet until halfway through the third quarter when Jonathan White led a drive with 40 yards on the ground before Tristan Szabo found  Michael Banks deep for a 20-yard touchdown pass knotting the game at 7. Nevertheless, the Braves managed to muster a 40-yard field goal that would put them ahead by three going into the fourth quarter.

Defensively the ‘Dogs were led by Marquis Willoughby, who had 3 solo tackles for loss, a sack, and 6 total tackles. McPherson had a lot of success in the pass defense on Saturday, with Avery Crawford, and Chris Roshell having an interception.

Following the win, Head Coach Jeremiah Fiscus said, “It was great to see the team overcome adversity and really play stronger as the game went on. The kids were accountable to each other and they stayed in it and it paid off. They are showing a high level of character and growth.”

This is McPherson College’s first time beating the Braves in Ottawa, Kansas since 2007.

The Bulldogs will be able to recharge during the bye week, and will continue with KCAC play by traveling to Winfield, Kansas to take on Southwestern College on September 30, at 1:00 PM.