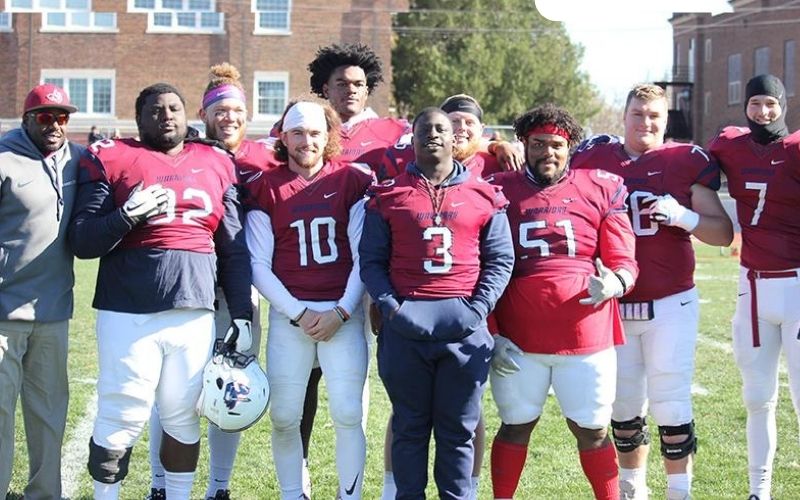 Sterling's Senior football players were celebrated before their game against McPherson College.

Sterling, Kan. -The Sterling College Warriors hosted the McPherson Bulldogs on Senior Day. The Warriors looked to put together back-to-back wins and the Bulldogs were looking to even the score in their win/loss column. At the end of the day, McPherson’s running game proved to be too much for the Warriors and the Bulldogs beat Sterling 47-10.

The Bulldogs got things going early scoring on their first three possessions. Sterling got their lone touchdown immediately following the third score. Ayden Rodriguez took the kickoff return from his own 11 yard line and found his way to the edge and won the footrace to the endzone for an 89-yard kickoff return touchdown. After Luis Franco made the PAT McPherson led by a score of 20-7. Before the half was over, Franco would put a 38-yard field goal attempt through the uprights to make the halftime score 20-10.

The second half belonged completely to the McPherson running game. Sterling was not able to put another score on the board and struggled to stop the top running back in the KCAC. When it was all said and done, Sterling took a 47-10 loss.

The Warriors continued to use their quarterback by committee that they have used much of the season. Rocklin Baptista proved to be most effective going 3-7 for 31 yards. Drew Ellis and TC Smith got most of the rushing action going into motion before the snap using timing plays to gain an advantage. Smith carried the ball 9 times for 43 yards and Ellis carried the ball 6 times for 31 yards.

Most of the noise was made on special teams. Ayden Rodgriguez had 7 kick returns for 190 yards; including the 89 yard return for a touchdown. Mason Cobb had 5 punts for 209 yards averaging 41.8 yards per punt, placing one inside the 20. Luis Franco was perfect on the day converting his one PAT opportunity and hitting his lone field goal attempt from 38 yards.

Defensively Dexter Walker Jr. had 17 tackles, the most of any player on the field. Flin Cameron made his way to the backfield for 2 sacks on the day. With those two sacks he becomes the all-time leader for sacks in a single season for Sterling College. Kendrick Bell also contributed a sack on the day.

Sterling finished the season with a 2-8 record and will look to build on the base that was established from first year Head Coach Darren Jackson. With one season of new offensive and defensive schemes in the books and a full year for this coaching staff to find players that fit this system and Sterling College, there is a lot to look forward to for the upcoming years of Sterling College football.