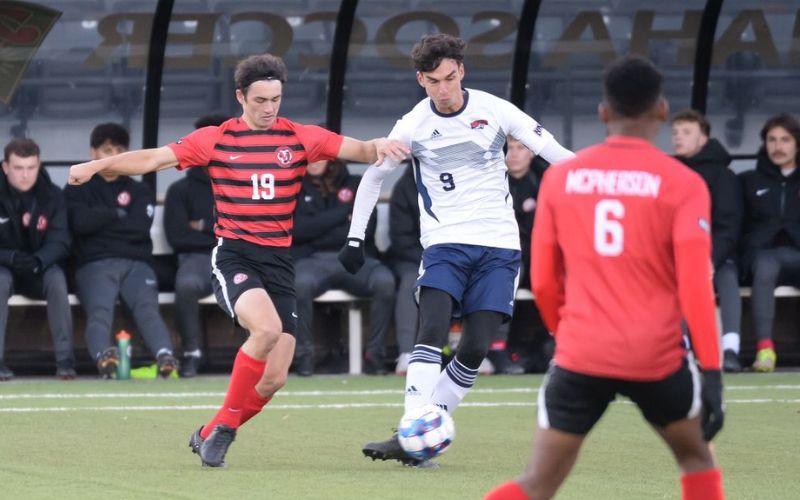 LEAVENWORTH, Kan. – The University of Saint Mary Men’s and Women’s Soccer teams hosted the McPherson Bulldogs for a mid-week matchup that resulted in a 2-2, and a 1-1 draw.

The Women’s match started fast with a quick score by the Bulldogs’ Mya Gildon, about 8 minutes into the match to put them up 1-0, and that score would remain until the half.

Saint Mary applied offensive pressure in the second and got on the board with a goal that tied the score at 1-1. The Bulldogs responded 20 minutes later with a goal from Caitlin Buendia, that gave them a 2-1 lead. Shortly after, Saint Mary found the back of the net to tie the game up at 2-2.

Both teams had opportunities to take the lead late, but the goalies stepped up to end the game in a 2-2 tie.

Both teams are still looking for their first win of the season, as the Bulldogs are now 0-1-2 in KCAC action.

In a more physical men’s match,  a red card and two yellow cards would go against the Spires in the first half, to the Bulldogs one yellow card. The Bulldogs would get on the scoreboard before the half, with Jakob Betzing finding the back of the net, as MC would go into the half leading 1-0. Teams alternated yellow cards in the second half before Saint Mary tied the game in the 88th minute to tie the match, which would later end in a draw.

The Bulldogs move to 1-0-1 in the KCAC. Saturday, the Bulldog Soccer teams will once again travel East, as they’ll take on Avila. The women’s match will begin at 12 p.m. The men’s match will follow at 2:30 p.m.