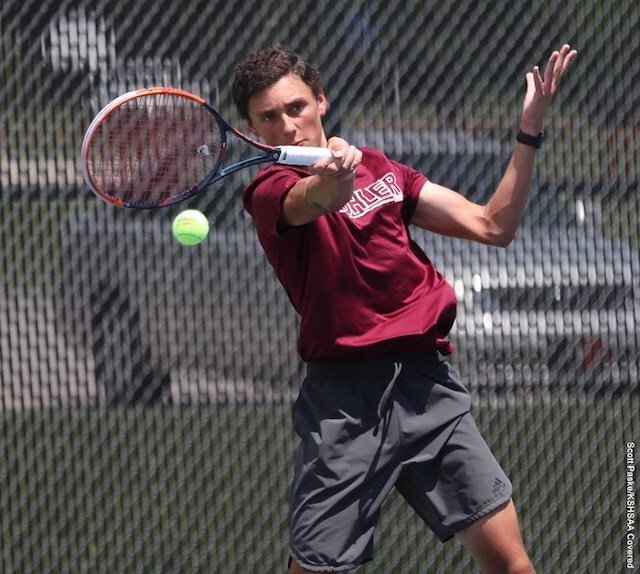 
Groff’s championship experience appeared to be a factor early in their 4A singles final, as he quickly pounced on a service-break opportunity on his way to winning the first set.


Later in the match, when Groff hit a good backhand passing shot to win a point, Spies countered with a well-placed cut serve to keep him from building momentum.


Perhaps most impressive, however, was Spies’ response after Groff went up a service break and led 4-2 in the third set. Spies steadied himself, getting back on serve at 4-all when Groff double-faulted at love-40. Spies then fought off a break point to move within one game of the victory, and foiled Groff’s final service game with an overhand smash on match point.


“I just had to mentally stay focused, be consistent, not get upset, not throw a racket,” said Spies, who capped a 35-3 season with a victory in his first three-set match of the spring. “Coach (Matt) Babcock kept me level-headed.”

Spies and Groff tried to maneuver each other with baseline shots that produced long points, testing each other’s mettle as the afternoon heat intensified. As good as the start was for Groff, who finished 30-7, Spies’ second set was equally impressive.

﻿
Spies, whose father, Robert, is the head track coach at Hutchinson Community College, adjusted his game for a marathon after falling behind. Many of his points in the second set were followed with emphatic yells.

“I tried to go lights out in the first set, and it didn’t help me at all because the score was awful,” Spies said. “I started getting more consistent and making him play more, and that really turned it.”
Spies’ lone losses this season came to Class 3-2-1A champion Nick Grabon of Wichita Collegiate, 3-2-1A runner-up Peyton Ryan and 5A third-place doubles finisher Connor Phelps of Salina Central. He said perseverance was the main lesson in each, a trait that served him well as he faced a third-set deficit against a player looking to go back to back.

“Not to get down and not stop fighting,” Spies said. “I lost three matches this season, and two of them I let get mental. The third, against Grabon, I played my best, I played lights out, and I think moved that on to today. I just kept fighting.”
For Groff, the silver linings in defeat included a second straight team title, and the knowledge he’ll have another opportunity next season as a senior.

“It means a lot,” Groff said of Independence’s team title. “We wanted to come here and repeat, so we did our job there.

“This is going to be motivation for me. I’m going to work my butt off this summer. I want to be first again.”