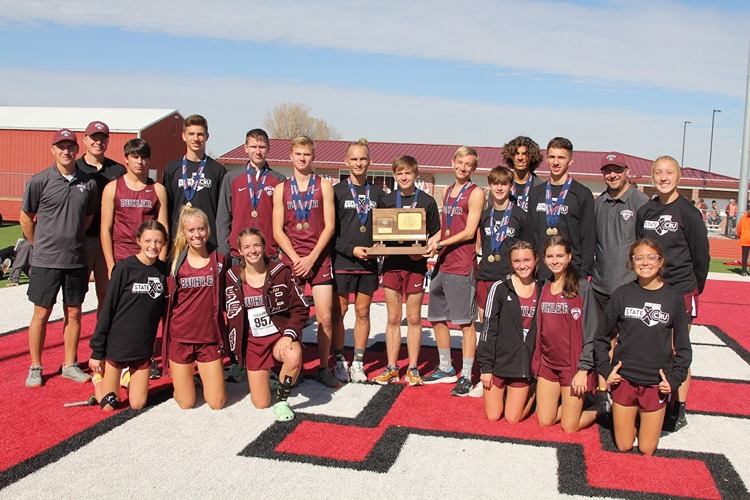 BUHLER, Kan. – Buhler cross country competed at State in Wamego on Oct. 29, with the boys finishing runner-up and the girls placing sixth. Another outstanding campaign by a group of runners who have never missed competing at the state meet.

The boys were coming off of four state championships in a row and had shown themselves to be contenders all season.  In finishing runner-up this season, they were just edged out of a fifth title by Wamego. The Red Raiders snuck two runners inside the top five, finishing just steps ahead of Buhler’s Kaden Lohrentz. His time of 16:45.57 was good for sixth place in the individual standings. Not far behind was Layne Whisler in ninth with a time of 16:55.51.

“The boys gave Wamego everything we had, and we came up just short,” head coach Curtis Morgan said. “We are still proud of the accomplishments of the team this season. I think that we almost overachieved this year.”

The girls, in recent years, have also been a consistent contender for a top-five finishing spot. While sixth was shy of their goal, it was a great effort against a very deep state field. Seniors Taryn Horning and Lindsay Warner have led the Buhler train all season. Horning was part of a group of about 10 runners within just seconds of each other. She would end up 30th with a time of 21:55.65, while Warner’s finishing mark of 22:19.06 placed her in 40th.

“We were okay with where we ended up,” Morgan said. “There were a lot of solid teams with the same type of makeup at state.”

Buhler saw a record number of athletes participate this year, meaning the future should be bright for some time to come. The boys graduate just one of their top seven runners, and the girls, just two of their top seven. Both groups will add a talented incoming freshman class to that mix next season.

“We will continue to set our expectations at the highest level,” Morgan said. “I believe that Buhler will be a contender at the state level for years to come.”