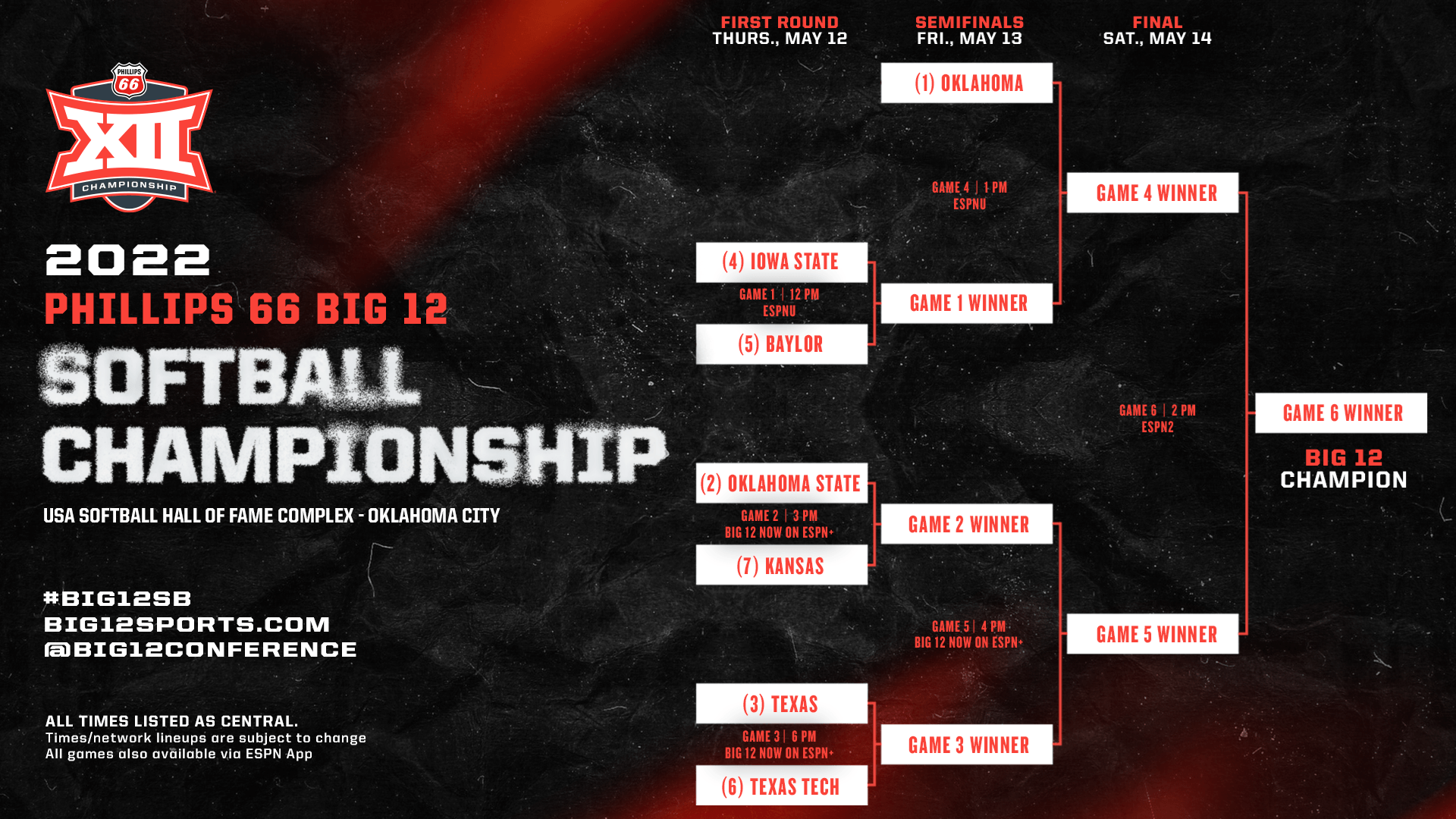 IRVING, TX –
The bracket has been revealed for the 2022 Phillips 66 Big 12 Softball Championship held in Oklahoma City at USA Softball Hall of Fame Complex from May 12-14.

The Championship will debut a new single-elimination format this year with the regular-season champion earning a first-round bye. The winner will receive the Big 12’s automatic bid to the 2022 NCAA Division I Softball Championship.

No. 1 ranked Oklahoma is the top seed in the field after completing a 17-1 run throughout league play which saw the Sooners win their 10th consecutive Big 12 regular-season championship. OU has won the Phillips 66 Big 12 Softball Championship each completed year since the tournament was restarted in 2017. The Sooners will play their first game on Friday at 1 p.m. CT against the winner of No. 4 seed Iowa State and No. 5 seed Baylor on ESPNU.

No. 7 Oklahoma State secured the No. 2 seed after going 14-4 in Conference games. The Cowgirls are looking for their first Big 12 Championship in program history. OSU will face seventh-seeded Kansas on Thursday at 3 p.m. CT on Big 12 Now on ESPN+. The Jayhawks last won the postseason championship in 2006.

No. 17 Texas locked up the third seed and will face sixth-seeded Texas Tech on Thursday night on Big 12 Now on ESPN+. The Longhorns are looking to celebrate in Oklahoma City for the first time since winning the 2005 Big 12 Championship. The Red Raiders will aim for their first crown in program history.

Iowa State and Baylor will face off on ESPNU to open the Championship on Thursday at noon CT. Both teams are looking for their first postseason Big 12 Championship.


Parking will be available on-site at the USA Softball Hall of Fame Complex for $20/day (cash or CC). Gates will open one hour prior to the start of the event and re-entry will not be allowed.

Stay tuned to Big12Sports.com and the league’s social media accounts for coverage throughout the Championship.