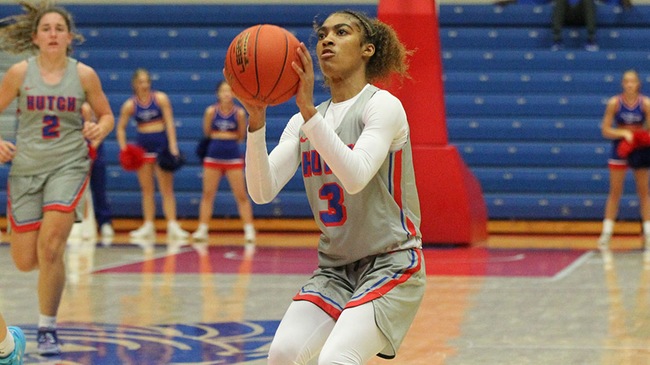 Journey Armstead posts her first career double-double with 11 points and 10 assists in No. 5 Hutchinson's 90-51 victory over the Washburn JV on Wednesday at the Sports Arena. (Billy Watson/Blue Dragon Sports Information)

HUTCHINSON, Kan. – The No. 5-ranked Hutchinson Community College Women’s Basketball team dropped 14 3-pointers and blitzed the Washburn University JV in the second quarter to cruise to a 90-51 victory on Wednesday night at the Sports Arena.

The Blue Dragons improve to 4-0 overall heading into weekend action in Great Bend against Labette on Friday and Redlands on Saturday.

Sophomore Mya Williams hit 4 of 9 from 3-point range to finished with a team-high 20 points, her fourth-straight 20-point game to start the season. Overall, Williams was 7 of 14 shooting.

Freshman Monae Duffy had 15 points with four rebounds and was also 7 of 14 shooting from the field.

Freshman Journey Armstead had her first career double-double with 11 points and 10 assists. Armstead ties for the eighth most assists in Blue Dragon single-game history. This is the 23rd time a Blue Dragons had reached 10 assists in a single game. Armstead also hit 3 of 7 from 3-point range.

Brynn McCormick came off the bench to add nine points.