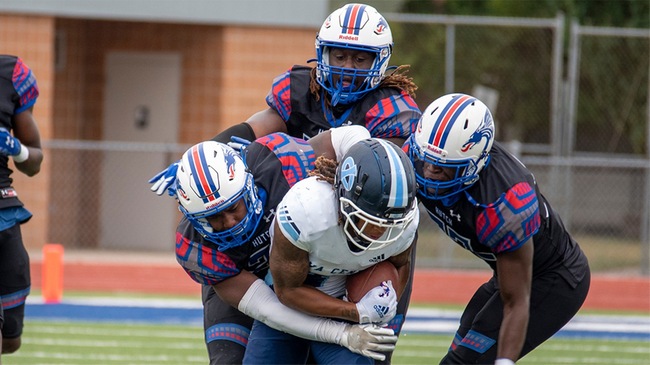 HUTCHINSON, Kan. – Off to a 3-0 start to the 2022 season, the Hutchinson Community College football team opens Jayhawk Conference play on Saturday at Coffeyville.

The No. 2-ranked Blue Dragons and Red Ravens (receiving votes in the NJCAA Rankings), kick off at 7 p.m. on Saturday at Veterans Memorial Stadium in Coffeyville.

Hutchinson overcame four turnovers, including three in the fourth quarter and defeated No. 7 Iowa Central 31-28 in overtime on Cole Segraves‘ 39-yard game-winning field goal. Coffeyville suffered its first loss of the season two weeks ago, falling to Independence 18-5 at Coffeyville.

The Blue Dragons enter Saturday’s game on a nine-game winning streak dating back to winning the final six games of 2021. That streak ties for the fifth-longest winning streak in program history, matching streaks in 1995 and in 2013-14. A victory on Saturday would tie for the third-longest streak of 10, which was done twice – 1973-74 and 2019-2020/21.

Coffeyville has dominated this series that dates back to 1932. The Red Ravens own a 56-30-4 overall record, but the Blue Dragons have won 12 of the last 14 games with Coffeyville. Last season, the Ravens upset preseason No. 1 Hutchinson 17-10 at Veterans Memorial Stadium.

Blue Dragon head coach Drew Dallas won his 20th game on the Hutchinson sideline after the overtime victory over Iowa Central. Dallas is now 7-1 all-time against NJCAA Top 10 teams and 9-1 against all ranked opponents.

Starting with Coffeyville, the Blue Dragons open a key stretch of games with Butler at Gowans Stadium next week and at Dodge City on October 8 in Dodge City.